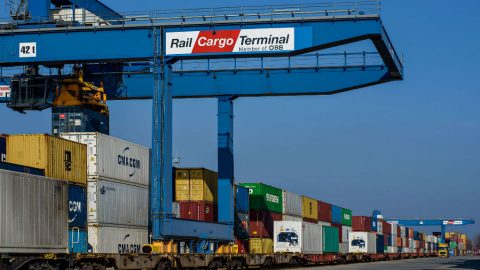 Ocean Rail Logistics, a Greek subsidiary of the Chinese Cosco Shipping, has taken a 15 per cent interest in the BILK rail terminal near the Hungarian capital Budapest. This terminal has the potential to become a rail freight hub on the New Silk Road.

The twenty-hectare terminal has a capacity of 220,000 TEU and is owned by the Hungarian subsidiary of the Austrian Rail Cargo Group (RCG). Erik Regter, Authorised Representative Seaports & Benelux at RCG commented on the recent deal during the European Silk Road Summit. “If there is someone knocking at your door, asking to come to your party, you can do two things: keep the door locked or explore how much they bring to the party”, he said advocating an open-door policy towards the Chinese.

Ocean Rail Logistics SA was founded two years ago in Greece and falls under the activities in Piraeus. The latest deal fits in with the Chinese ambitions to turn the Greek port into a “pivot point” of the transport corridor between Asia and Europe. Budapest is strategically located to be a consolidation hub within reach of the port of Pireaus, serving the Central and Eastern European (CEE) hinterland.

Earlier this month the Austrian operator teamed up with the German Kombiverkehr to realise a three-weekly rail freight connection between Wels, Vienna and Budapest. The three cities in Germany, Austria and Hungary are main nodes in the CEE rail freight network. The parties claim to not only connect these three CEE countries with the line, but the entire northern European region with south-eastern Europe and the Asian part of Turkey.