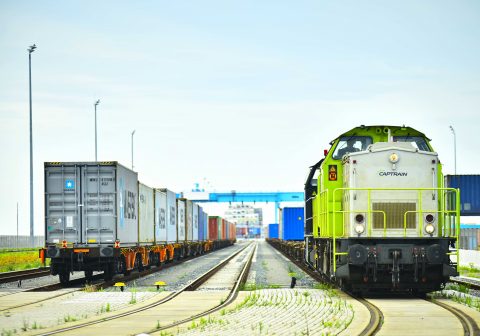 A hitchhike on the train from Urumqi to Rotterdam

This month Rotterdam was the final destination of the first groupage cargo train from China. After departing from Chongqing last month, it picked up wagons in Urumqi, the border region of China to head for Duisburg, where it dropped the first load. The train then continued to the Dutch port city.

This was reported by China News after the first test train had left China on 22 October. It referred to the service as China’s first consolidation business (cargo groupage) for Sino-European railway, and also the first trial run of the Secure and Smart Trade Line Pilot Program (SSTL), a project supported by the European Union. The test journey was operated by Yuxinou.

Rotterdam received a total of 42 tonnes of goods worth 40,000 US dollars. This cargo originated from the province of Xinjiang, the westernmost province of China. Until now, this region has not established a rail freight services on the New Silk Road. The main city of Urumqi has rather served as a transit hub.

The groupage service is considered a good chance for the region to hop on board the train to Europe. Xinjiang products can ‘hitchhike’ on trains coming from any region in China, as they all pass Urumqi when crossing to Kazakhstan. For this test journey local Xinjiang enterprises were selected to launch the pilot route of the Urumqi-Rotterdam railway by adding two containers. There are many chemical industries in Urumqi, producing cargo classified as dangerous goods. These are currently not (yet) permitted on Chinese railways, but this could change in the near future.

The groupage service is also a first for China. Urumqi Customs has transformed its facilities in order to handle wagons instead of trains, realise the assembly of the trains, the consolidation of goods, and the transportation of goods, both domestically and cross-border. This transfer model is supposed to increase efficiency of westbound trains and it is expected that the model will be adopted by other provinces too.

Apart from being a first groupage journey, the train is also the first to be operated under the flag of the Sino-EU Secure and Smart Trade Line (SSTL) project. This a pilot project between the EU and Asia which allows testing end-to-end supply chain security instruments and mechanisms in line with WCO SAFE Framework of Standards (FoS). It tests these security standards with regards to containers, customs-to-customs’ data exchange, risk management cooperation, mutual recognition of customs controls and trade partnership programmes.

This is the first demonstration project that fully implements the FoS. The companies that participate in the programme gain a number of conveniences, including early declaration, priority of review, priority of cargo inspection and release procedures; reduction of inspection rates for import and export goods, and maximum guarantee of fast customs clearance.

A first to Rotterdam

Although the port of Rotterdam was not actively involved in establishing the rail freight service, with this test journey it has received the first shipment from China via Duisburg. It is the first time a Chinese operator (Yuxinou, originated in Chongqing) organises a train to Duisburg and from there continues to Rotterdam.

Until now, the role of the Dutch has remained subtle. It has a regular connection with the Dutch hub of Tilburg, where trains run on and off to Chengdu and Changsha. With the extension, there is a service called the Chengdu-Tilburg Rotterdam line. The Urumqi-Duisburg-Rotterdam railway line has potential to be more of a prominent service, if it is to become a regular line. So far, it was only just a test delivery.

From China to Gdańsk port in 12 days by rail