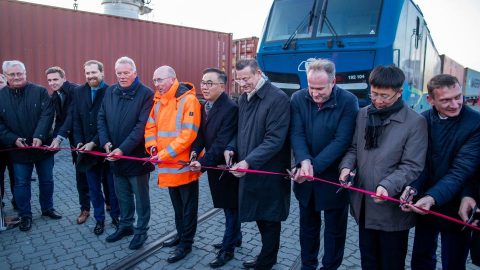 A single waybill for both rail and ferry to China

It is a first in many regards: the multimodal connection between XI’an in Central China to Hamburg. Via Kaliningrad, partly by ferry and with a single CIM/SMGS waybill. “The train, which departein westward direction beginning of November, is the first of its kind to be en route with a single CIM/SMGS waybill – even though this was a multimodal journey”, said operator UTLC ERA.

On Tuesday 12 November, the cargo from China arrived on the German island of Rügen, docking at the Baltic Sea port of Mukran. It had just crossed the Baltic sea by ferry, originating from the port of Baltysk in the Kaliningrad region of Russia. It had gotten there by railway from China. From Mukran, it continued its journey by rail to Hamburg.

Although it sounds like a complex puzzle, the logistics solution is celebrated as a milestone on the New Silk Road. “A perfect product, with a transit time of eleven days from Xi’an to Mukran”, commented carrier of the train BTE, adding that the aim is to reduce this to only ten days.

The relatively shot lead time is partly due to the simplification of customs procedure through the CIM/SMGS waybill. Where Europe applies the CIM Uniform Rules, Russia, China and other Asian countries apply the SMGS Convention. With the CIM/SMGS consignment note these systems are standardised, resulting in less interruption of movement, entailing delays, additional costs and administrative burdens.

“In using a single CIM/SMGS waybill in multimodal, transcontinental transport by rail and sea for the first time, UTLC ERA has found a new way to reduce transit times and increase transport volumes on the New Silk Road. Moreover, this new CIM/SMGS waybill is being used for the first time not only for two internationally different legal systems but also for two different modes of transport”, commented the operator of the service.

The service is also unique in that it provides another example of how the Kaliningrad region could serve as a viable alternative to the more frequently used route via the Malaszewicze-Brest border crossing between Poland and Belarus. The Russian enclave allows for overland transit to Poland, but also for seaport departures to Western European ports.

“This stage of the journey across the Baltic Sea means that the Chinese initiative of the New Silk Road now has a new corridor from Kaliningrad (formerly Königsberg) direct to Germany. The port of Kaliningrad is linked with the entire Baltic Sea area via short ferry routes”, commented UTLC ERA. As CEO Alexey Grom explains: “The first deliveries of goods via this short sea route already show that there is huge potential. However, the success of this new route depends on the degree of integration and interaction between all transport partners.”

This month two other routes via Kaliningrad were launched, marking similar enthousiasm about the transit time development. The latest service launched is Silkway Amber, connecting Zhengzhou in Eastern China with the German port of Hamburg via Kaliningrad. However, in this case the entire journey was carried out by train, which took fourteen days.

Also this month was the launch of an all rail freight service from Xi’an to Hamburg via Kaliningrad by DHL, which at that point claimed a record lead time of eleven days for the journey Xi’an-Hamburg. Leaving aside the superlatives, the route via Kaliningrad clearly contributes to lead time improvement on the route between China and Germany.