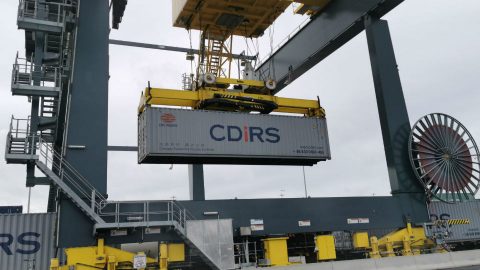 Under the new circumstances, companies must come up with smart solutions to stay on the New Silk Road. Hubs are a fundamental part of that. This is the view of Imad Jenayeh, Senior Business Development Manager at CFL multimodal. He is currently working on making the hub function for the Luxembourg intermodal terminal of Dudelange-Bettembourg visible to the market.

With his remarks, he is referring to policy shift of the Chinese government. Last year it issued that only westbound container trains with a maximum of 2 empties would be subsidized, and this summer it announced the gradual decline of subsidies, starting from next year. Such rules have created a new, more challenging playing field for those who want to have a slice of the pie.

In Luxembourg, they are confident about the future. A first train departed from Chengdu in Central China, heading for Bettembourg-Dudelange in Luxembourg on 19 October. It was the first test journey in westward direction. In April this year, a test run was carried out from Luxembourg to Chengdu. These journeys have proven to be successful, said Jenayeh.

Nevertheless, the service will not yet be established as a regular line, he explains. “Chengdu is focussing on the existing lines at the moment. Due to the restrictions on empty container trains, the Chinese platform companies are rather reducing the number of train departures. But the demand is there, and the service is ready to be operated.”

According to Jenayeh, the interest in the connection from Luxembourg is among those who now use sea transport to China. “There is a big demand from these customers. A lot of companies want to test rail freight transportation. These customers are not only from Luxembourg, they come from France and Spain too”.

“Bettembourg could form a hub for this particular region”, says Jenayeh. “We are in a very good position to serve south-European markets compared, for example, to Duisburg. This market could even extend to Italy, for example serving cities such as Milan.”

“When the objective is to win new markets, a hub system is a smart solution”, Jenayeh continues. In his view, this is where Europe as well as China should be heading. “Under the current circumstances, we are forced to come up with smarter solutions. We have to establish more efficient supply chains. Consolidation of cargo volumes is one such solution.”

In Europe, hubs have been formed since the start of the New Silk Road. Duisburg is a notable example, but there are other cities with similar functions, such as Hamburg. “It is not that we are competing with such hubs, but we think that countries as France and Spain are better served by a location as Bettembourg.”

Meanwhile, a similar system should be established in China, the CFL multimodal official says. Currently, a lot is happening in China and the general view is that only strong platforms will remain in the end. With such developments, a hub system will also be needed in China, Jenayeh thinks. “It is a challenge to remain in the market now, but the key is in working together.”

The role of Luxembourg on the New Silk Road is also a topic on the programme of the European Silk Road Summit. Imad Jenayeh, senior business development manager at CFL Multimodal will talk about the Chengdu-Luxembourg China Railway Express as part of the session European hubs, on the second day of the summit.

The European Silk Road Summit takes place on 26 and 27 November in Venlo, the Netherlands. It is a two-day, international event dedicated to the New Silk Road. The programme is complete and can be viewed here. Registration is still open.