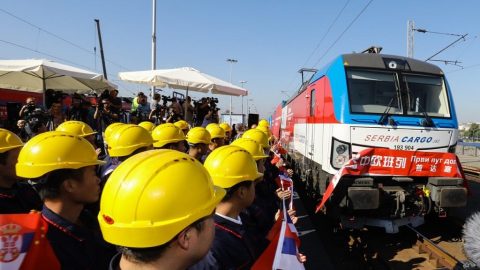 China Railway Express has tested a new link to Europe. For the first time, a Chinese block train arrived in Serbia. It delivered equipment to be used by Chinese workers for the construction of the Budapest – Belgrade high-speed railway.

The first Chinese container train departed from the city of Jinan, the province of Shangdong, on 24 September. A month later, on 24 October, it arrived at the Novi Beograd (New Belgrade) railway station in Belgrade. The train has travelled a distance of around 10,500 kilometres via Mongolia, Russia, Belarus, Poland, Slovakia and Hungary.

On the Serbian section of the route, the wagonset loaded with 28 containers was hauled by a Siemens Vectron locomotive of Serbia Cargo (Srbija Kargo), the country’s state-owned rail freight operator. The Jinan – Belgrade train delivered equipment weighing 500 tonnes, including transformers, cables, integrated automation systems for substations, remote control systems for the contact network and other solutions for the future Budapest – Belgrade high-speed line.

It is unclear whether the Jinan – Belgrade service will be regular or not. However, the government of Serbia plans to use it to transport goods to and from China. “The opening of this rail freight link is significant for us as well as for businesses from the region, as it is an opportunity to export their products to the Chinese market, but also to import goods from China”, said Zorana Mihajlovic, Serbian Deputy Prime Minister and Minister of Construction, Transport and Infrastructure. Earlier, Serbia shipped single containers to China using railway links that start in neighbouring countries, such as Hungary, Poland and Austria.

The Budapest – Belgrade high-speed railway of 350 kilometres long should be completed by 2023. It is modernised mostly by Chinese companies. China Railway International Corporation (CRIC) and China Railway International Group (CRIG) established a joint venture with Hungarian State Railways (MÁV). The enterprise is called Kínai-Magyar Vasúti Nonprofit, and it is responsible for upgrading the Hungarian 152-kilometre section of the railway line.

At the same time, the Serbian section is divided between Chinese and Russian contractors. Two other Chinese companies, China Communications Construction Company (CCCC) together with China Railways International (CRI), is modernising the railway between Belgrade and Stara Pazova. CCCC is also responsible for the works on the Novi Sad-Subotica section. The remaining part between Novi Sad and Stara Pazova is being modernised by RZD International, a subsidiary of Russian Railways.