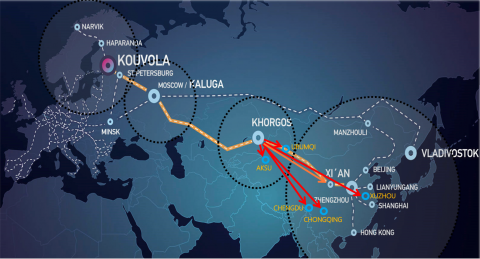 From Atlantic to Pacific by rail and still fresh

The Eurasian railway corridor must be extended to the Norwegian port of Narvik, where it marks the final departure for long-haul transport to the US. It would make the Nordic Silk Road complete. This was the main takeaway at the RailGate Kouvola conference, held on 26 September in the Finnish city.

The Nordic Silk Road is the route from China to Europe via the Trans-Siberian railway, but rather than entering the EU via Poland its first call in the continent is Kouvola. From here, other Scandinavian destinations can be reached. Such as the port of Narvik, the most northern end of the railway network in Norway.

Not just a wish

The railway line connecting the Atlantic port to the Trans-Siberian railway is already there. It has been for the last 100 years, points out Rune J. Arnøy, Director of the port of Narvik. His presentation was themed ‘Norway – Gateway to North America’. “Kazakhstan has expressed its ambition to turn to Narvik as its port to the Atlantic.. The same can apply to China”, he said.

It is not just a wish of some beneficiaries. The plan was included in an agreement signed in June 2018, says Nancy Li, General Director of the Scand-China International Link. The train service that currently connects the Central Chinese city of Xi’an to Kouvola will eventually run to Narvik via Haparanda, the Finnish-Swedish border crossing. And it only makes sense, believes Arnøy. “Why would we ship a product to Europe in order to transport it to China?” 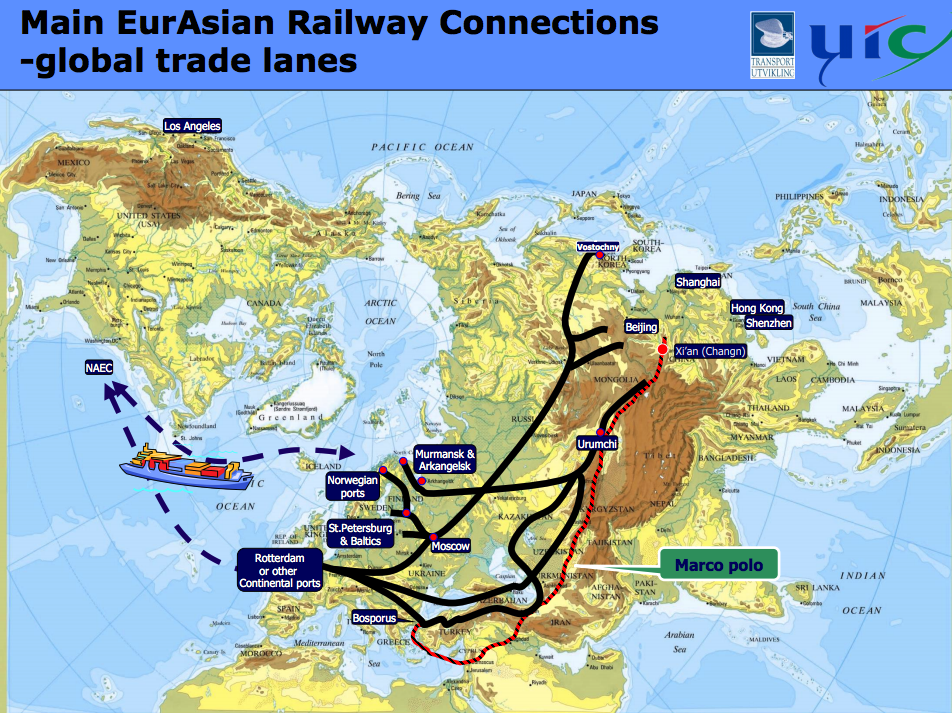 With this last remark he refers specifically to the Norwegian salmon, the frontrunner that is currently waiting to be shipped by train to China, all the way through Russia. What was still unthinkable a year ago is now close to possible. Fresh goods may be moved overland through Russia, since President Vladimir Poetin issued a decree on 1 June 2019. Previously, the only option was the airplane.

“It is ridiculous. We cannot do that any longer. It is too costly and not sustainable. Now we can move overland we must realise the shipment of salmon by train”, says Ola Strand, CEO of Norway BluWrap. His company has developed a way to do this. With a special packaging the shelf life of fish is doubled to 30 days. “For pork the results are even more astonishing: the meat stays good for 90 days. With this technology these products can easily be shipped to China by train.”

However, the wrapping of the product is not all that remains to be done. Although the Russians have lifted the ban, the practical details of the shipment remain to be disclosed. The decree sets the condition that trains as well as trucks should be traceable during the entire journey across the country. A control system involving the use of identification tools must be in place. In Kouvola, nobody seemed to be able to answer how these tools must be applied.

Similarly, the Chinese authorities are working out the practicality of the new transport possibility. Currently the only cities in China with the facilities to handle conditioned cargo are Chengdu and Chongqing, pointed out Li. Hence, it is these cities that will be the end destinations for the fresh new products from Europe for now. It remains to be seen whether hubs as Xi’an will follow.

If it is up to the forwarder of the Kouvola train to China, the train follows the trend. Although Kouvola Cargo Handling Oy offers the service to Xi’an at the moment, it is investigating the possibilities to call on other Chinese destinations as well. Chengdu and Zhengzhou are among the options, said Anu Kujansuu, Marketing Director at the company. Furthermore, it is preparing a regular westbound trip on the route Xi’an-Kouvola. “Last year, there were some delays in Xi’an due to congestion. Therefore, we had to wait with this service. But we can confirm that it will start this year.”

Meanwhile, Kouvola is gearing up for the rising volumes with the expanded Rail Road Terminal. This should turn the city’s rail facility in a large-scale intermodal terminal, the largest in the Tehola-Kullasvaara area. This project was launched in 2015 and is now gaining momentum, as it has received an EU fund of 9 million Euros. In 2022 the terminal will be operative, while the surrounding area will turn into a logistics park in the months after. “It will be able to handle trains of 1.1km in length, Petteri Portaankorva, Development Director of the City of Kouvola said.

In the meantime, improvements must be made in the Scandinavian countries. “If we really expect volumes along this stretch to rise, we must increase the capacity of the railway lines between Norway and Finland, said Arnøy. Fortunately, also this is a project on the agenda. The Iron Ore Line is upgraded, as well as the Haparanda Line. While the first runs from Narvik to Lulea in Sweden, the second connects the Swedish cities of Boden and Haparanda, all on the route to Finland.

“The Iron Ore Line will get a double track”, says Mona Mansour, Senior Adviser of European Affairs for North Sweden European Office. “The capacity that this generates should be available in 2020.” According to Arnøy, a double track enables the handling of 40 trains per day, whereas it now allows for 26 per day. “It is mostly about the stretch from Narvik up till Kiruna, this is the most congested part.”

Finally, the Haparanda Line needs upgrading on the Finnish side of the border, such as electrification of the track. Also this is in the pipeline. “If all this is done, we can use the full potential of the railways”, Arnøy added.

Of course, all these works are not done just for salmon. A year ago there was not even a possibility to ship salmon by train, but the mentioned projects were already in place. The north of Sweden is an important export region to Europe, with billions of tonnes of iron ore moved across the seas, in addition to minerals, fisheries and other industrial goods. Likewise, the ice-free port of Narvik is already an essential gateway on the Atlantic Ocean. As Mansour puts it, the connection between Narvik and the north of Norway and Sweden form a vital route of international trade.

But she also adds: “The BRI certainly plays a role in shaping these transport policies, especially due to the huge potential of train shipments of salmon towards the east.” And it is not only the Chinese or Russians anticipating the opportunities. Kazakhstan wants a piece of the pie. It sees possibilities in a smooth transit to the Atlantic port. It already has good relations with Finland and a record of 5,170 units shipped to the country by train in 2018, according to Zhanna Sartbayeva, Kazakh Ambassador to Finland. And if all goes to plan, Narvik is only 26 hours away from Kouvola.

Do you want to know more about the salmon train, Railgate Finland, Russian transit traffic or other New Silk Road news? On 26 and 27 November the European Silk Road Summit takes place in Maasport, Venlo. This is a two-day international event dedicated to the New Silk Road. These topics and more are on the agenda.

Micael Blomster, who is behind the first shipment of salmon by train, will be speaking about this groundbreaking operation. In November, the first journeys may have been carried out. His presentation is a part of the session called Transit through Russia, taking place on the second day, 27 November. Various speakers will discuss the new transit options through Russia in this block.

The role of Kouvola as a Scandinavian hub on the New Silk Road is also on the agenda. Simo Päivinen will speak about the latest developments and ambitions of Kouvola Innovation Oy, the company operating RailGate Finland. His presentation is part of the session called European hubs, where various upcoming hubs on the New Silk Road will be highlighted. Registration for this event is already open. The programme and speakers can be found on the website.