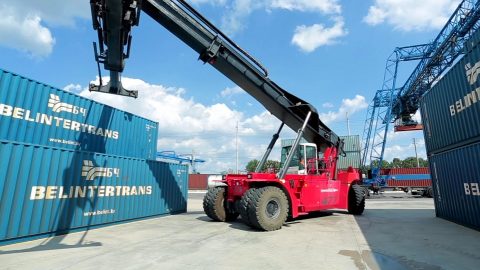 In 2020 Belarusian Railway will start the construction of a new intermodal terminal for handling products transported between China and the EU. It will be located at the Great Stone Industrial Park, a joint Chinese-Belarusian venture. The project will be performed together with several partners: China Merchants, Duisburger Hafen and Hupac Intermodal.

The design of the future terminal and the preliminary works will start this year. At the initial stage, the participants intend to invest around 30 million Dollars (26.7 million Euros). The project includes the construction of the terminal itself, storage areas and railway sidings. After finalising the works, the intermodal terminal will form an essential part of the Great Stone Industrial Park. It will be focused on the export of products manufactured at the park to EU countries and import of Chinese components, necessary for the companies based at the park.

The construction of the Great Stone Industrial Park started in May 2015. It is located 25 kilometres southeast from Minsk, the capital of Belarus, and close to Minsk airport. According to the plans, the entire project should be completed in 2030. The investments in the development of this industrial park are estimated at 2 billion Dollars (around 1.8 billion Euros). By the end of 2018, circa 430 million Dollars (around 384 million Euros) had already been invested in the project. More than fifty companies are based in the park now, most of them Chinese (including Huawei, ZTE, China Merchants, Zinzhu Corporation, etc.).

Last year, the German logistics company Duisburger Hafen, operator of the intermodal terminal in Duisburg, acquired around 1 per cent of the shares. The majority belongs to the Chinese companies of China CAMC Engineering, Sinomach, China Merchants, Harbin Investment Group (68 per cent) and the Government of Belarus (31 per cent).

Thirty kilometres westward from the Great Stone Industrial Park lies Kolyadichi Terminal, one of the largest intermodal facilities in Belarus. It is operated by Belintertrans, a subsidiary of Belarusian Railway. The facility handles around 70,000 wagons per year. Kolyadichi terminal is an important junction for both the New Silk Road and the corridor between the Baltic and Black Sea.

Thanks for the article. Can we take this text for translation for our blog https://pvl.com.ua/?