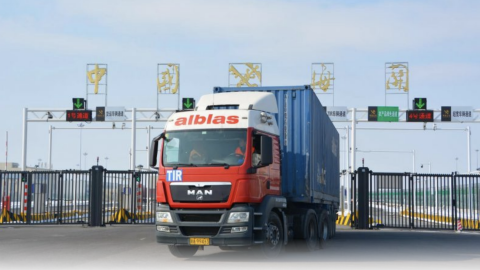 The rail freight industry on the New Silk Road is to face new competition from the road, as the Chinese government has fully opened all its checkpoints to international road transport under TIR starting 25 June 2019. This was reported by the International Road Transport Union (IRU).

TIR (Transport International Routiers) is a globally applicable international customs transit and guarantee system.
It enables goods to be shipped from a country of origin, through transit countries, to a country of destination in sealed load compartments. In this way, the cargo does not have to be checked or taken out during the journey. The compartments are controlled by customs via a multilateral, mutually recognised system.

The system is already in place in many countries, but China had not fully adopted the customs administration until Monday, when it opened all 1200 border points for the system. China first launched the system in May 2018. According to the IRU, cross-border transport between China and countries along the Belt and Road corridor reached new heights ever since, representing a “fourth logistics channel to rival the existing sea, air and rail channels”.

“According to industry estimates, transport by road is between five to ten times cheaper than by air and just as fast, while TIR transport from China to Europe could cut delivery time by at least ten days compared with rail”, the company noted.

Whether the transport by road is really faster than by rail is debated. In November last year, Alblas Int. Transport organised a road journey in what it called a record time. It drove a truck from Khorgos to the Polish city of Słubice in 13 days. It is important to note that Khorgos is on the border with Kazakhstan. In comparison, a journey from Xi’an in the east of China to Mannheim is Germany is made in 15 days, according to carrier BTW.

In February this year, the same transport company carried out the journey in eastern direction. A truck from the company traveled the route from Paris to the West-Chinese city of Ürümqi successfully, but without mentioning the journey time.

Alblas reported to be satisfied with the speed of the ride. “It is a journey of no less than eight thousand kilometers that has been completed with one driver”, it wrote on its Linkedin page. Alblas wants to set up s regular road service between the continents this same year.