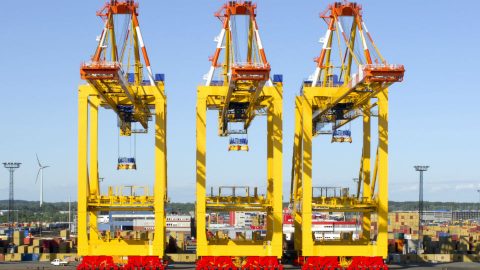 New Silk Road operator UTLC ERA and logistics provider Hellmann Worldwide have agreed to continue transporting finished cars by rail from Bremerhaven in Germany to Chongqing in China. The partners started the service in April this year. After a successful two months, they want to further increase the capacity of this route. Both parties their intent towards this goal at the Transport & Logistics Trade Fair held in Munich last week.

Hellmann Worldwide Logistics Road and Rail GmbH & Co. KG (Hellmann Worldwide) and United Transport Logistics Company – Eurasian Rail Alliance (UTLC ERA) have been working together since April to realise weekly shipments of goods, including luxury and high-end German cars, to China by rail. The route ensures a delivery time that is three weeks shorter compared with transport by sea and has a current capacity of shipping 8,000 cars per year.

As part of this agreement, both companies will work together to further develop effective container transport between Europe and China, increasing rail cargo capacities sustainably in the coming year. In doing this, UTLC ERA is responsible for the complete transport service on the 1520 mm broad gauge track, which crosses through the territories of Belarus, Russia and Kazakhstan. Hellmann Worldwide takes over this task on the European border.

“We are delighted to have found a new partner in Hellmann Worldwide Logistics. For our European clients it is convenient that transporting goods by rail through three countries is arranged through one operator. Before, cargo shippers had to go to Astana, Moscow and Minsk to coordinate the container shipment from China to Europe. Our service for the transport of containers meets all the requirements of European clients with regard to the speed, security and reliability of their freight deliveries”, noted UTLC ERA president Alexey Grom.

Matthias Magnor, Chief Operating Officer of Hellmann Worldwide Logistics added: “Thanks to UTLC ERA’s support, we have been able to fulfill the new transport contract for finished cars to China very successfully in the past two months, with an error margin of 0 percent. We are looking forward to continued fruitful cooperation.“

Earlier this year, UTLC ERA hinted that it wants to develop long-term relations with European transport and logistics companies in operating the broad gauge network of the CIS countries. The new and most important hubs in Europe are Neumarkt, Barcelona, Bremerhaven and Luxembourg, the operator described.

In April it signed cooperation agreements with Slovak rail freight operator ZSSK Cargo and Lithuanian Railways, dedicated to the improvement of container shipments to and from Slovakia and Lithuania. At the same trade fair in Munich last week, the company signed a Memorandum of Understanding with the Italian terminal of Verona and the German port of Rostock, outlining their intention to cooperate on a multimodal route between China and Europe.

As a joint company existing of Russian, Belarusian and Kazakhstan railways, the parties involved signed a shareholder agreement to regulate their holdings in UTLC ERA this week. This agreement stresses their intention to continue integrating rail transit through the territory of the Eurasian Economic Union (EAEU). The document was signed by Oleg Belozerov, Director General – and Chairman of the Board of Russian Railways, Sauat Mynbayev, Chairman of the Board of NC KTZ JSC, and Vladimir Morozov, Head of the Belarusian Railways Association. The signing ceremony was also attended by Alexey Grom, President of JSC UTLC ERA.

The shareholder agreement is a principally new corporate agreement for UTLC ERA that regulates rights and responsibilities of parties that serve as company shareholders. All three shareholders have an equal number of votes because the shares have been distributed equally between RZD LLC, the Belarusian Railway State Association and NC KTZ JSC, each holding 33.33 per cent. Every shareholder has the right to delegate two of its representatives to the Board of Directors.