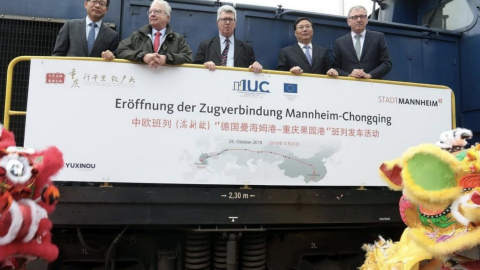 The first train on the new railway link between Mannheim and Chongqing has arrived in the Chinese city on 17 November. It completed a journey of 11,200 kilometres, carrying 41 containers of 40 feet.

The Mannheim-Chongqing Shuttle connects the Rhine-Neckar European Metropolitan Region with the major municipal region of Chongqing in South West China. The train is operated by the Chinese company Yuxinou and multimodal operator Maersk, while the assembly of the freight containers was carried out at the Port of Mannheim by Contargo.

The train travelled through Poland, Belarus, Russia and Kazakhstan, crossing the border points of Malaszewicze-Brest and Dostyk-Alashankou. According to the logistics company Contargo, the transport time of goods between Mannheim and China is significantly reduced due to the new train connection. The freight train takes about seventeen days, while at least 35 by ship.

The city of Mannheim is an important multimodal hub, situated on the banks of the Rhine River. Similarly, Chongqing is located in the interior of the upper reaches of the Yangtze River. The connection was established with the support of the European Commission, under the IUC Asia Programme. Mannheim and Chongqing joined the programme as pilot cities of 2017. According to the city of Mannheim, there was a great need for a direct rail connection to China in the Rhine-Neckar metropolitan region.

In July 2018, representatives of the City of Mannheim and representatives of a logistics company from Chongqing (Yuxinou Logistics Company Ltd) signed a Memorandum of Understanding, with the focus to “foster collaboration in the field of logistics and freight transport”. On 19 October, a freight train was tested on the new line and on the 25th of the same month, the service was officially inaugurated. It is considered to become a regular weekly service.