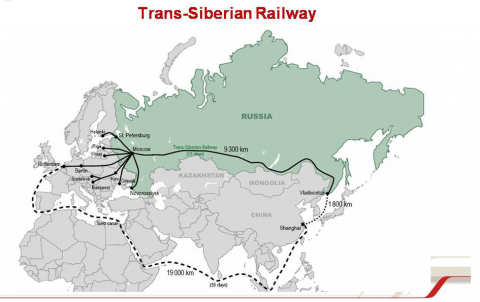 From east to west through Russia in seven days

The volume of containerised freight shipments along the Trans-Siberian railway through Russia increased by 77 per cent last year, reported Russian Railways. More than 262,000 containers were shipped on the route connecting China and Europe.

Oleg Belozerov, CEO and Chairman of the Board of Russian Railways made these remarks earlier this month. “This record figure will be exceeded by a big margin this year. Between January and August 2018, 590,000 containers were shipped on the Trans-Siberian connection, 22 per cent more than during the same period last year.

Speaking about the prospects for the development of Trans-Siberian transportation, Oleg Belozerov said that work was currently underway to develop the infrastructure of the Trans-Siberian railway and the Baikal-Amur Main Line (BAM), where throughput should increase to 180 million tonnes by 2024.

As a result, the transportation of large quantities of raw materials can be switched to the BAM Line and therefore free up considerable capacity for the development of accelerated regular container services along the Trans-Siberian Railway. This will create the conditions for a fourfold increase in transit container traffic and facilitate a reduction in the transportation time from the Far East to Russia’s western border to just seven days.

The head of OJSC Russian Railways expressed confidence that attracting additional freight to the Trans-Siberian route was closely connected, among other things, with the increasing digitalisation of international rail transport.

“The introduction of the CIM/SMGS electronic consignment note and cooperation with state regulatory authorities on electronic documents can lend a great impetus to the route’s development,” said Oleg Belozerov. He added that as part of this work, Russian Railways and Russia’s Federal Customs Service had signed a joint action plan for completing customs operations in electronic form.