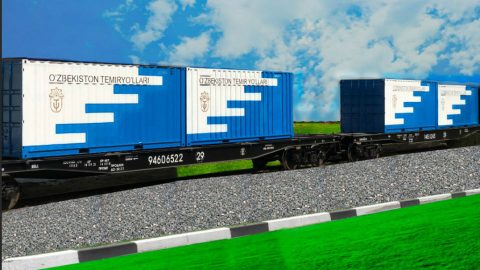 Uzbekistan and China are one step closer to constructing the China-Kyrgyzstan-Uzbekistan railway line, a new branch of New Silk Road that opens another, shorter route to Iran. The counterparts agreed to sign a Memorandum of Cooperation in the railway sector, which contains clauses about this new railway corridor.

The China-Kyrgyzstan-Uzbekistan railway line has been discussed since the end of the 1990s. In 2003, the feasibility study was prepared. Initially, the construction of the 900-kilometre line was evaluated at a cost of 1.1 billion Euros but later this amount increased to 1.7 billion Euros. Now, the estimated cost of the project is 5 to 6 billion Euros.

To speed up the project, Uzbekistan Railways (Uzbekiston temir yullari) has been improving its infrastructure, rolling stock and freight services during the last few years. Last week, the railway company launched a container service between Tashkent, the capital city, and Andijan in the eastern part of the country. Also, Uzbekistan has a long track record of cooperation with China for renewing rolling stock. From 2002 the country purchased several dozens of electric locomotives for passenger and freight transportation.

Moreover, Uzbekistan made huge investments in its railway infrastructure and launched a high-speed passenger service in 2011 between Tashkent and Samarkand, the country’s second largest city. In 2016, the high-speed route was expanded to the city of Bukhara.

The new railway will open up new opportunities for freight transportation in the Central Asian countries, because it will increase their transit potential and attract additional cargo from China. Also, the new route allows for a faster rail freight route from China to Iran and Turkey.

The project has been strained due to financial and political reasons, as well as disagreements amongst various counterparts. The main bottleneck was and remains Kyrgyzstan, which is characterised by mountainous landscape. China wanted to build here a 1435-mm railway, but Kyrgyzstan strongly opposed that idea and insisted on a broad, 1520-mm gauge line. The main argument of Kyrgyzstan was the fear to lose transit cargo, because freight trains will run through this country without any stops if a 1435-mm railway were to be constructed.