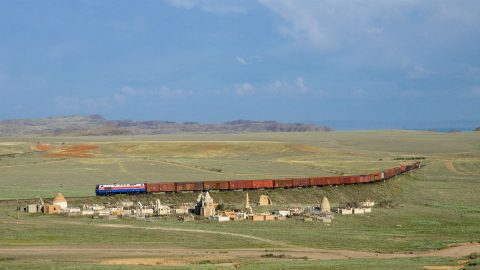 Published on 15-08-2018 at 11:39
A freight train on transit through Kazakhstan. Photo: Wikimedia Commons

Nurminen Logistics is to establish a regular railway connection between Finland and China by the end of this year. After almost a year of operations, the service proved to be highly successful and meets sufficient demand, the Finland-based company said.

The plans were reported in Railway Gazette this week. According to the publication, the service will depart from the Port of Helsinki. Nurminen Logistics was cited explaining that demand for Finnish railway transport services grew considerably in H1 2018, boosted by container transport from Finland to China and the commencement of export deliveries within its project business.

Its first service in the direction of China departed on 10 November 2017, from the terminal of Niirala nearby the border with Russia. The journey takes through Russia and Kazakhstan and further to Xi’an in Central China in ten to twelve days. The main advantage of this service is that Finland has the same rail width as Russia and Kazakhstan. Hence, the containers will only be reloaded to another train once, at the border between China and Kazakhstan.

According to Nurminen, there is plenty of potential for the connection, such as the Finnish forest industry export to China. This Finnish export exceeded a value of 11 billion Euros in 2016, of which Asia accounted for approximately nineteen per cent and China around seven per cent. Several other industrial sectors are interested in taking advantage of a fast train connection, the logistics provider pointed out.