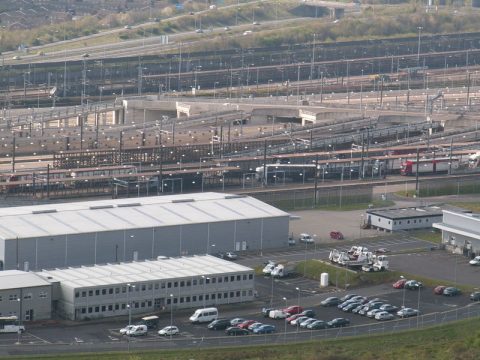 A new rail freight service through Channel Tunnel was launched, shuttling between London and Duisburg. From the German hub, it connects to other services running to Poland and eventually China.

Operated by GB Railfreight and Transfesa on behalf of CMA CGM Logistics, the new intermodal service transports containers between London Gateway and Duisburg on a weekly basis. The first train departed the UK capital on Tuesday 10 April. The service has the potential to reach six returns per week in the future, said Getlink (formerly known as Eurotunnel), operator of the Channel Tunnel.

“The introduction of this service and its connection to the new Silk Road (One Belt, One Road) is further proof of Eurotunnel’s determination to relaunch rail freight, as already demonstrated with the construction of the whole-train scanner in Frethun, the introduction of the ETICA (financing) scheme, which supports the launch of new services, and the restructuring implemented to add efficiency to border formalities at the Frethun yard with Europorte Channel”, Getlink said.

Getlink recorded a four per cent rise in revenues for 2017, up to 1,033 billion Euros. The revenues of Europorte, Getlink’s dedicated rail freight arm and the third biggest operator in France, were up by two per cent to 118.5 million Euros.