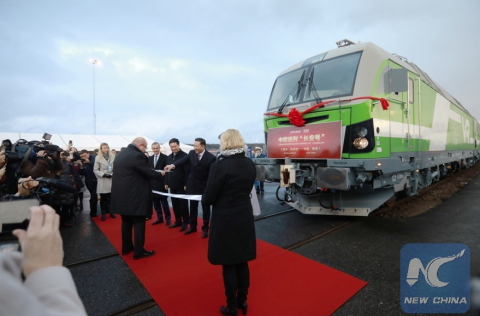 Finland’s foray into the New Silk Road economic project linking Europe with the Far East has officially commenced with the departure of a timber-laden train from the southeastern city of Kouvola to Xi’an in north west China via Kazakhstan and Russia. The 9,110 kilometre service, with 41 containers being pulled by twin Vectro VR locomotives, is the first rail link between China and this Nordic region.

Electronic devices, spare parts, and agricultural specialties such as blueberry and salmon are also among the exports destined for Far East consumers, with equivalent cargoes also coming the other way to the Nordic region. Antti Häkkänen, Finland’s Minister of Justice, said he was ‘extremely pleased’ to see the new route opening between Kouvola and China: “Major global trends, such as digitalisation, automation and sustainable development, are going to have a significant impact also on the logistics and transport services of the future,” he said. “The new route will enhance the efficiency of transportation and bring a competitive edge to rail transport. I am convinced that this new Silk Road between Finland and China will prosper and flourish.”

Operated by Kazakhstan Railway (KTZ Express) and jointly organised by Xi’an International Trade & Logistic Park and Kouvola Innovation Ltd, the service will run once a week, with one train departing from Kouvola on Thursdays and another from Xi’an on Wednesdays. As the starting point of the original Silk Road trading route, Xi’an plays an important role in the Belt and Road initiative and is also a major road transport hub. Nancy Li, General Director of Scan-China International Link, said that Xi’an was ‘poised to connect east and west’ as the new route provides both reliability and efficiency.

Murat Nurtleuov, Ambassador of Kazakhstan to Finland, added that while this year had already seen hundreds of rail freight services between China and Europe, the new line diverted to Kouvola would serve as a new chapter for economic ties and cultural communication now that Finland was part of the Belt and Road initiative.