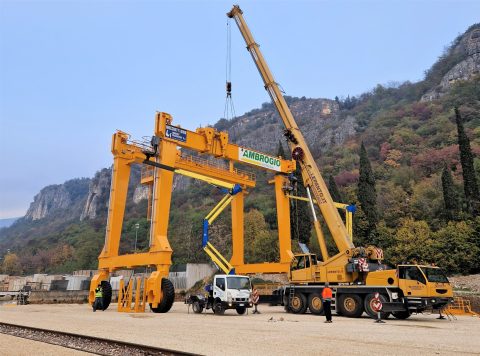 The first phase of construction of the new Ambrogio Intermodal terminal in Domegliara, near Verona, is almost complete. Despite Ambrogio’s efforts to work efficiently, as Giulia Ambrogio, Group Marketing Executive of the company said, the final word belongs to Rete Ferroviaria Italiana (RFI), the Italian infrastructure manager.

Construction of the Ambrogio terminal in Domeglaira started in May. Once completed, the terminal will allow for the handling of trains that can reach 750 metres in length. The first three rail tracks have been laid, and an area of over 30,000 square metres has been prepared for the transit of heavy vehicles. Moreover, last week a new rubber crane gantry and a reach stacker were assembled, together with the implementation of two terminal tractors.

In this video, you can find watch the process of assembling the rubber gantry crane and hear the voices of the people involved in the process.

Waiting for RFI while making do

Initially, the terminal was scheduled to be ready by the end of 2022. As Ambrogio, highlighted, however, it is up to RFI to connect the terminal to the rail network. However, the infrastructure manager did not schedule a deadline for this yet, impeding the setting of an exact opening date.

In the meantime, Ambrogio Intermodal is making lemonade with the lemons they got. In fact, they are currently relying on the Valpolicella Railway Terminal (TFV), near the location of their future terminal. However, as Ambrogio pointed out, the relatively small size of the terminal does not allow for the handling of longer trains.

From TFV, Ambrogio launched a connection with Neuss, in northwestern Germany. Over the past two years, the frequency of this service has been increased from two to three weekly roundtrips. Ambrogio claimed that, with the new terminal, they are expecting to increase them further to four or five rotations per week.

Ambrogio Intermodal is one of the major Italian intermodal transportation companies on the national and international market. Funded in 1969, Ambrogio operates through a private European network, with 7 rail terminals, a fleet of 400 freight wagons and over 1,300 intermodal units.

The company can count on covered swap bodies and 45’ box containers, mostly used to transport dry cargo. The company takes care of the transportation of goods for various sectors: agro-food, petrochemical, steel, and paper, as Giulia Ambrogio said.