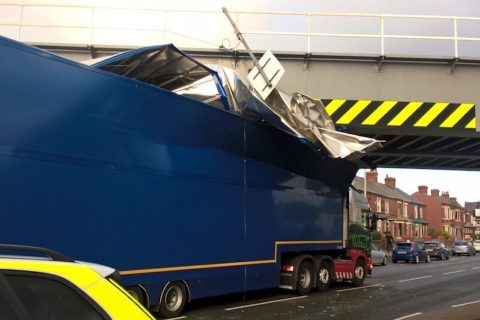 Published on 25-11-2022 at 11:07
Network Fail. Unplanned unloading as a huge lorry gets wrecked under a railway bridge yet againImage Network Rail media centre

Road freight fails are wrecking rail freight schedules, and causing plenty more disruption too. Research by Britain’s infrastructure agency Network Rail reveals that around a half of UK truck drivers are unaware of the height of their vehicle. Couple that with anecdotal evidence that almost all drivers are unaware of the lack of a height restriction on UK roads, and you are well on your way to understanding why Britain’s bridges are among the bashiest bridges in the world, often causing delay to rail freight operations.

Forty-three per cent of lorry drivers admit to not measuring their vehicle before heading out on the road, and fifty-two per cent admit to not taking low bridges into account. Neither ommission may be a point of law, but common sense seems to be at a premium when it comes to avoiding the most public of embarrassments behind the wheel. Moreover, they could lead to much more than a red face when asked to present your documents to an investigating officer.

Prime time for a height limit?

The internet may be full of them, but there’s always room for a few more epic fails involving massive trucks and not-so-massive bridges. That’s why Network Rail is going out of its way to remind drivers that bridges are not in the habit of getting out of the way of trucks that are too big for their absolutely fixed clearances.

While there is on height limit on British roads, it is up to drivers to make sure their route is clear and their vehicle is not too big to pass along their intended route. Network Rail say they know that most drivers are complete professionals and take safety on the road very seriously. However, the infrastructure agency also says they know there are also some areas where we could be better across the industry to stop the huge number of bridge strikes happening and give drivers and logistics companies the tools they need to help tackle the problem more effectively. Very much a coded message to use your head and check what’s up top before setting off.

Rail rage and hit and run caught on cam

It has been a constant cause of rail rage that drivers have often been able to escape the financial costs of ramming into rail infrastructure. However, a series of landmark legal cases mean Network Rail can now claim back from hauliers the huge costs incurred by bridge strikes. “We are aiming to claim back 100 per cent”, reads their statement. “Until these legal successes, we’ve been paying for repairs and compensating train operating companies for delays to their services where we haven’t been able to claim.” Meanwhile NR has released video of dimwitted drivers proving time and again that massive trucks mean massive disruption when battering bridges.

That cost falls on the UK taxpayer, says Network Rail, in a statement that clearly sees that as unacceptable. Even so, a number of bridge strikes are ‘hit and run’, where the road vehicle is still able to drive away. That however does not absolve Network Rail from a safety inspection, and the agency puts the cost of that, on average, at 13,000 pounds (about 15,500 euro).

Bridge strike champion (not that sort of champion)

There are tools, training and guidance from Network Rail, available in several languages, for drivers and logistics companies to help tackle bridge strikes. “Throughout the year, we work alongside some of Britain’s biggest haulage firms as well as Highways England, the Driving Vehicles Standards Agency (DVSA) and other industry bodies to reduce the risk of bridge strikes”, say NR.

Network Rail also has a network of bridge strike ‘champions’ covering each route across Britain, who raise awareness of the issue by visiting logistics companies and lead on managing the risk of bridge strikes locally. “Bridge strikes impact the whole transport network”, says their statement. “By working together we can provide the right training and education for logistics companies to help them support their drivers, ensure that those who do break the rules are penalised, and that we can lower the impact of strikes to the travelling public when they do happen. We hope the whole industry will get behind this campaign and do all they can to stop bridge strikes.”