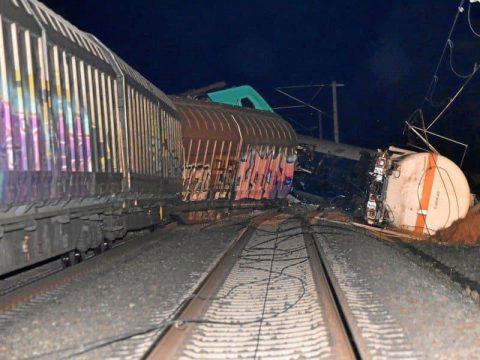 Collision: Berlin-Hanover line closed at least until the end of the weekend

The Berlin-Hanover railway line has been closed after two freight trains collided near Giifhorn, 60 kilometres east of Hannover, in northern Germany. Since the accident caused one wagon filled with propane gas to leak, it will not be possible to clean the scene up until the gas is dissipated. Deutsche Bahn said that traffic should not restart before at least Sunday evening.

The accident occurred on Thursday, 17 November, very early in the morning, as the local fire authority, Freiwillige Feuerwehr Gifhorn, stated. A freight train, which stopped at a railway signal, was hit from behind by another that did not stop. The second train was carrying 25 wagons loaded with propane gas, one of which started to leak after the collision and consequent derailment.

The consequences of the collision

The driver of the second train was badly injured and was taken to hospital, while the driver of the first train sustained light injuries. On a slightly more positive note, the gas leak will not impact the inhabitants of the towns nearby the accident. However, workers on the location need to work with respiratory protection.

As DB reported, various trains, especially passenger ones, that were planning on using the Berlin-Hanover, rail route will be diverted or cancelled. The reasons leading up to the accident are not clear as of yet. The Federal Authority for Railway Accident Investigation pointed out that they have started an investigation into the accident.

1 comment op “Collision: Berlin-Hanover line closed at least until the end of the weekend”

Still, without knowing cause, stated: it was an “accident”…
(Accordingly, unforeseeable and result in a serie, just most unfavourably combined.)
Forgivingly, just as normally, here it is anticipated, that neither standard, nor “state of the art” procedure, is to be blamed, etc., etc.
This may be the truth, but not always…
Thus, excusing “accident” should be spared, until cause is known, or?
(With a serious quality program present, IM could have used feed back, from earlier, etc. and…)