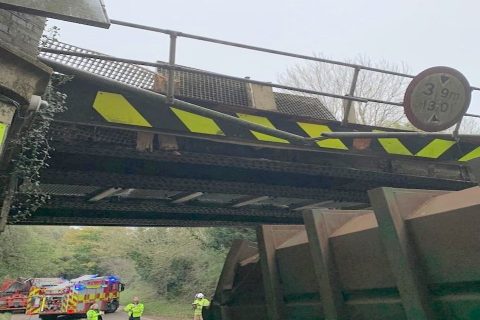 The railway bridge struck so heavily that it had to be partly demolished is still out of action two weeks after the incident. Rail traffic is severely disrupted, and road users have also been urged to avoid the town of Oakham, the administrative centre of the ceremonial county of Rutland in the East Midlands of England. The level crossings through the town are well-known as local congestion points and are expected to be busier than normal.

Delays were expected to continue for road users this weekend (Saturday, 19 November) as rebuilding work continues. Meanwhile, passenger services are curtailed, and vital freight services need to travel in the ‘wrong direction’ through the town and over Foster’s Bridge, which is only operating one way after it was struck by a heavy goods vehicle on Saturday, 5 November.

It seems to be the season for bridge bashing. Extensive damage to a structure carrying the line over a main road in Ketton, near Oakham in the county of Rutland, means that train services between Leicester and Peterborough are likely to be disrupted for at least another week. The route connects the East Coast Main Line and ports such as Felixstowe with the logistics ‘Golden Triangle’ of the East Midlands and the Midland Main Line north to Sheffield. Most passenger services are replaced by buses, and the single available undamaged track is being used bi-directional by freight.

According to reports from Network Rail, a lorry carrying a heavy load struck the bridge on Saturday, 5 November, shortly before 8 am. Fosters Bridge – which crosses the busy A6121 Stamford Road – was so badly damaged that a significant part needs to be replaced before trains can run safely again. Engineers are at work on the major repairs, which are expected to last another week at least. “Freight services carrying essential goods will be diverted via London wherever possible to keep people’s Christmas gifts on track”, said a Network Rail statement.

Over 1600 bridge strikes … every year

Between 1 April 2020 and 31 March 2021, there were 1,624 bridge strikes reported across the network. Each incident costs the UK taxpayer around 13,000 pounds (15,500 euros). Network Rail has been running their ‘Wise Up, Size Up’ campaign since 2018 to urge drivers to know the height of their vehicle and choose an appropriate route before setting off.

However, this case was just one of five every day where road drivers failed to pay attention to their vehicle’s height. Leicestershire Police, who have responsibility for the area, said the incident had happened shortly before 07.40hrs on Saturday, 5 November. Officers attended the scene, and road closures were put in place while emergency services attended. Mostly, such incidents result in acute embarrassment for the driver, followed by the sobering realisation that their inattention will result in criminal proceedings. This driver, however, was even less fortunate and was taken to hospital. “Enquiries remain ongoing”, said a police statement.

All roots of disturbings have to be outed, from railways, now!
(Simple risk of a risk means added logistic costs, those too high – and since long due for reducing!)
Line by line, step by step, railways substantially have to be upgraded! Capacity and utilisation of assets, soundly and sustainably, have to be ensured, with safe margins, etc.!
(The current strategy of Industry and IM:s, has proved devastating, for all – except producers of road vehicles…)