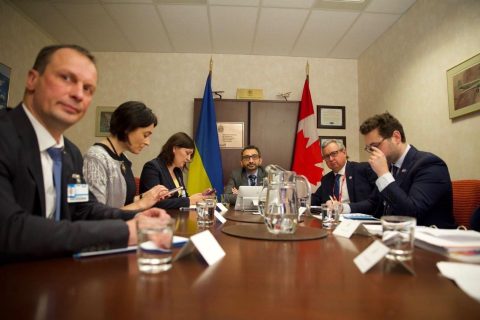 Canada will help Ukraine in restoring its railway infrastructure. This was agreed during a meeting on Wednesday 28 September between the respective ministries. The governments of Canada and Ukraine, together with Ukrainian Railways and RAC on behalf of Canadian railways formed a working group, which will coordinate the reconstruction.

“Since the beginning of the full-scale invasion of Russia, control over 6 thousand kilometers of railway tracks has been damaged or lost, fifty bridges have been destroyed, dozens of railway stations and stations have ceased to function”, said the Deputy Director of the Investment Department at Ukrainian Railways, Volodymyr S.

“Together with the Canadian partners, we agreed to create a joint working group, which will determine the priority projects for cooperation. We expect that in the near future we will go to specific projects and start their implementation” commented Oleksandr Kubrakov, minister of Infrastructure of Ukraine.

More particularly, the working group will focus on rebuilding the rail infrastructure, maximising rail capacity and analysing challenges to the movement of Ukrainian export-ready commodities by rail. In doing this, the working group will work together with the Canadian rail industry to implement core objectives and expertise and attempt to identify practical solutions with government and industry allies.

“As a key ally and partner to the Ukrainian reconstruction efforts, the Government of Canada will leverage broader industry and supply chain partnerships that can help inform decisions on freight commodity movements by rail”, commented the Minister of Transport Omar Alghabra.

“Together with our industry partners, we will ensure the continued movement of people and crucial commodities and products that are vital to supporting the wellness and livelihoods of Ukrainians.”

The signatories of the EU declaration plan to contribute to the reconstruction with urgently needed materials as well as with knowledge. European railway companies have also made an appeal to the EU to create a “Rebuild Ukraine” fund. The capital made available with the fund will be implemented specifically for railways and rail infrastructure in Ukraine.