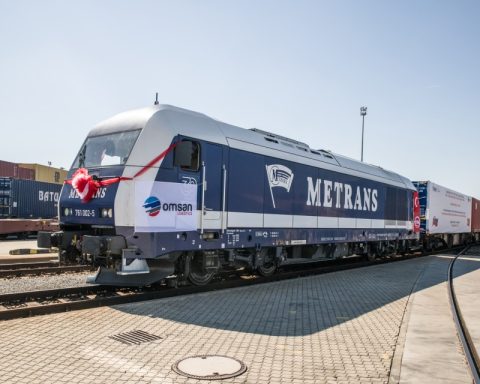 Metrans expands its network in Poland and Turkey

Metrans has launched new rail freight services that will expand its network from the Baltic Sea to the Black Sea. The services will respectively connect Turkey with Slovakia and Poland with the Czech Republic. The Turkey – Slovakia service is Metrans’ first southbound train from Slovakia. The Poland – Czechia connection is both an opening on the Baltic Sea for Metrans as well as an example of the possible role of the Polish southern border.

“The complete rail network is now stretching from Gdansk, Hamburg, Bremerhaven, Wilhelmshaven and Rotterdam in northern Europe to Koper, Trieste, Piraeus and Istanbul in the south,” said the company.

Metrans and Omsan collaborating in Turkey

This service was announced in July, with transit time revolving around six days and departures from both terminals on Wednesdays and Saturdays. The route will be through Turkey, Bulgaria, Serbia, Hungary, and Slovakia. The Halkali terminal is the entry/exit point for trains transiting between Turkey and the European mainland. Currently, two weekly roundtrips are planned.

“The new connection with Turkey was made possible by a cooperation with the Turkish logistic provider Omsan Logistics,” Metrans pointed out. The first train left from the Metrans Hub Terminal Dunajska Streda, in Slovakia, heading toward Turkey. It will be Metrans’ first southbound departure from the terminal in Slovakia.

When it comes to the new connection between Poland and the Czech Republic, Metrans finally has an opening on the Baltic Sea. From 5 September, three weekly rotations are planned between the terminal in Poland and Metrans terminal in Ostrava, in the Czech Republic, with a stopover in Dabrowa Gornicza, 15 kilometres from Katowice. This new service will be suitable for 750-metre-long trains.

Moreover, it is an example of the opportunities that the Polish southern border may offer. This border is, in fact, the least used one when it comes to rail freight, compared to the eastern and western borders. However, the recent geopolitical developments have complicated matters for the border crossings in the East, possibly making these types of routes more appealing.