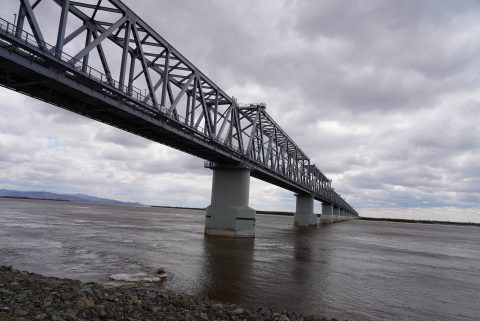 The Tongjiang-Nizhneleninskoye railway bridge over the Heilongjiang River connecting China and Russia is expected to become operative as early as this month. It is the first railway bridge linking China and Russia. The 7,194-meter-long bridge has been ready since August 2021, after 7 years of construction. However, it could not be used due to the Heilongjiang River flooding in the summer.

Construction of the bridge has been completed for over a year. An exact date of the opening date, however, has not been determined yet, as a source told the Global Times. The bridge is expected to shorten the trip between Heilongjiang and Moscow by 809 kilometers and save 10 hours of travel time when compared to the journey through the Suifenhe border crossing. In addition, earlier this year, a newly built facility for customs officers to conduct inspection and quarantine work was added on the Chinese side.

Russia and China have been strengthening their commercial relationship with cross-border infrastructure built over the past few years. The first highway bridge crossing the Heilongjiang River was opened in June. This new bridge, however, will be the first rail bridge between the two countries.

The growth of the relationship between China and Russia can be seen in the numbers mentioned by the Global Times. In the first seven months of this year, China’s trade with Russia rose by 29 per cent year-on-year.