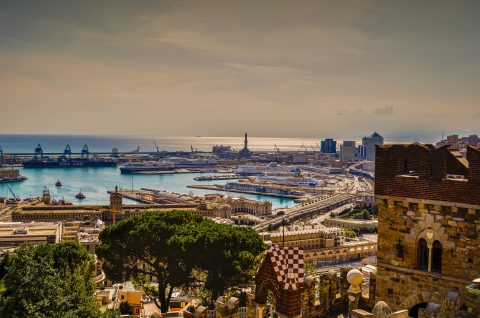 Published on 15-08-2022 at 11:28
Port of Genoa and Lantern Tower viewed from the d'Albertis Castle. Source: Maurizio Beatrici/Wikimedia Commons

The Ports of Genoa are growing their rail freight volumes. TEUs moved in the second quarter of 2022 increased by 9 per cent when compared to the same period of 2021, which was already a record-setting number. The Ports of Genoa encompasses the Italian ports of Genoa, Savona, Vado Ligure, and Prà, all of which are supervised by the Western Ligurian Sea Port Authority.

Key to this growth is the Genoa Sampierdarena basin, where the number of trains in the second quarter of 2022 increased by 34,8 per cent compared to the same period of 2021. Moreover, in the same period, the Vado Gateway Terminal moved over 14,000 TEUs, an increase of 22,2 per cent, for a total of 327 trains, 81 more than the second quarter of 2021.

Overall transport is growing in the Ports of Genoa

Ports, Advantage, by nature, of Europe, need railways!
(Just a small minority enjoys direct access to a port – and currently, at on shore transports, for majority the single available alternative is the road trucks.)
For nearness, Goal of “Union”… – for sake of railways… for added capacity and utilisation – a New Old Railway, an upgraded, is needed!
Shift, at main lines (TEN-T) etc., can be performed – and paid for – within a 10 year period…
Quality (low risk supply chains) pays!