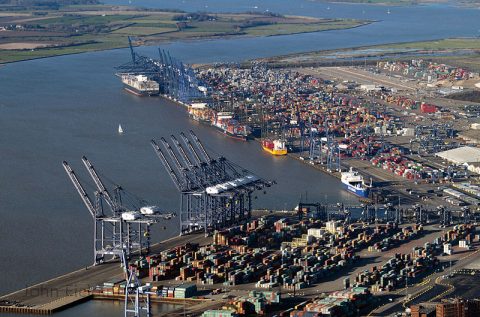 The biggest container port in the UK, and the single most busy intermodal rail freight terminal, will grind to a halt this month under a longterm strike by members of the Unite union. Around 1900 members at the east coast port will walk out in a dispute sparked by a below-inflation pay offer. The eight-day stoppage will begin on 21 August, unless last minute talks prevail.

Negotiations at the conciliation service (Acas) have so far failed to reach a satisfactory conclusion. The union says the employer, Felixstowe Dock and Railway Company, has so far failed to improve on its offer of a seven per cent pay increase. While this would recently have been a huge settlement, it currently falls significantly below the reported inflation rate of 11.8 per cent. Industrial relations were already strained as workers only received a 1.4 per cent, below inflation, increase last year.

The breadth of coverage of the strike call is a measure of how disruptive the walk out could be. Specialist news outlets – from food to construction, and from logistics to shipping – all issued dire warnings of supply chain challenges at least as bad as those experienced in the aftermath of last year’s Ever Given grounding in the Suez Canal, and even approaching the level of the pandemic chaos.

Felixstowe is the UK’s largest container port and 48 per cent of containers brought into the UK are transported via its quaysides. The port is a huge generator of intermodal rail traffic. Around 75 trains arrive and depart every day, round the clock. While rail staff are not directly involved in this dispute, the withdrawal of labour by Unite members will cripple operations. Strike action will have a huge effect on the UK’s supply chain and will also cause severe disruption to international maritime trade, including the logistics and haulage sectors.

“Both Felixstowe docks and its parent company [Hutchison Ports] are both massively profitable and incredibly wealthy”, said Sharon Graham, the Unite general secretary. “They are fully able to pay the workforce a fair day’s pay. The company has prioritised delivering multi-million pound dividends rather than paying its workers a decent wage. Unite is entirely focused on enhancing its members’ jobs, pay and conditions and it will be giving the workers at Felixstowe its complete support until this dispute is resolved and a decent pay increase is secured.”

For their part, Felixstowe has said that they still want to find a solution for all concerned. Talks are scheduled for Monday (8 August) but without any advance belief of finding a resolution. A statement from the port said they understood the concerns of employees, particularly over the cost of living – which finacial sources in the UK say will go even higher this year.

Rail freight tested to the limit

What long term effects this stoppage may have on rail freight operations remains open to conjecture. The nature of international trade is that goods are already sitting on the quayside, due for retailers’ winter and Christmas sales. They are alongside fast moving consumer goods and perishables, that demand immediate dispatch to distribution centres around the UK.

While capacity exists at other ports around the UK, the highly integrated nature of the supply chain would be significantly strained to cope with such a long stoppage, and the backlog it will cause. Experts within the logistics chain say that the effects of the Ever Given grounding, and the pandemic, are still nowhere near unwinding. This stoppage could live up to the hype, and clearing it may well test rail freight capacity to the limit.

Frustrations, Brexit…, etc. are symptoms, of short comings – at Industry of infrastructure – at basics…
(At clients, now just a minority affords luxury, of not caring about “eta”…)
Accordingly, at railways, for sake of clients, roots of costly disturbing, frequent, “optimal maintenance” (repairing)…, etc., now decisively have to be outed!
Added capacity and utilisation, at existing, urgently is needed – and pays! (All other devices upgrade, for higher load – and lower costs, etc.)