Germany’s higher rail investments may not be enough

Despite investing more money per capita than ever before in the rail network, Germany is still lagging behind. This is especially true when comparing Germany to other European countries, says Dirk Flege, Allianz pro Schiene Managing Director. 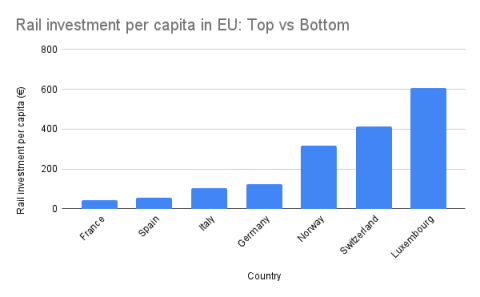 Germany’s relatively low investments clash with the country’s rising demand for freight and passenger transport by rail. Moreover, it does not fit with the goals established by the current coalition agreement. Maria Leenen, Managing Director of SCI Verkher points out that Germany is also quite behind when it comes to digitising the rail network.

This is not the first instance in which the German government’s rail investments plan is criticised by the sector. In May, the German Bundestag committee opted to follow the plan laid out by the previous government, without prioritising rail before road nor pushing for digitisation, as highlighted by Flege.

The transport sector has placed its hopes in the federal budget for 2023, expecting the growth and strengthening of German rail transport. After all, the new coalition government had important plans for the future of German rail: a 25 per cent increase in rail freight transport by 2030 as well as strong investments in rail network digitisation.

In 2021, Germany has overtaken Italy for the first time in a per capita comparison (103 euro for Italy, 124 for Germany). It can be considered a significant improvement when compared to the 88 euro per capita invested in 2020.

This increase, according to the Pro Rail Alliance, has been possible thanks to the funds that the federal government has allocated for the Climate Protection Program 2030 (Klimaschutzprogramm). Flege mentions that Germany is expected to decrease again its per capita investments in rail in 2022.

Now, however, upgrading of existing, added capacity and utilisation of existing assets, is the urgently requested. Simply quality of infrastructure now is too low and virtually obstructing.
Line by line, capacity shall be added – within current budgets for reinvestments… (Quality is bottleneck!)
32,5 ton axial load shall be the min. and safely allowed for… Allocating of fresh money shall not be at an elderly, no longer timely, regrettably, in all respects an devastatingly costly standard!