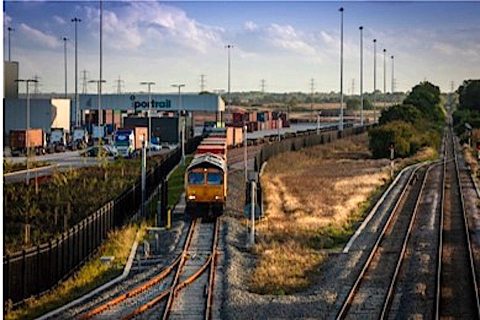 The transition team for the new over-arching body for network and operations management in the UK – Great British Railways – has launched a consultation seeking nationwide views on how to grow freight to reduce road congestion and carbon emissions.

The self-styled future guiding mind for Britain’s railways has launched a call for evidence to get views from businesses on how to increase the amount of freight that is moved by rail. The Great British Railways Transition Team (GBRTT) wants views and ideas from the widest possible range of stakeholders within and beyond the rail and logistics sectors on how to expand rail freight. The three-month process begins today (5 July) and runs until the end of September.

The Great British Railways Transition Team say that the estimated combined effort of rail freight currently accounts for just 10 per cent of surface freight. However that delivers social and economic benefits worth 2.5 billion pounds (2.95 billion euro) to the UK each year. GBRTT say that more than 60 per cent of these benefits are realised in former industrial heartlands, which suggest that rail freight could be a significant vehicle to driver the UK government’s ‘levelling up’ agenda – a buzz-word for economic investment in areas left behind by the booming economy of London and the South East.

“A freight growth target will act as a catalyst for investment in the rail freight sector by setting a clear government ambition for growth”, says a statement from GBRTT. “It will help to highlight the role of freight on the rail network, giving confidence to the sector’s customers and investors. In doing so it will help meet the country’s ambitious greenhouse gas reduction targets and reduce the number of lorries on the road.”

If rail freight volumes treble by 2050, as the GBRTT says modelling indicates could be required to meet the net-zero targets, then there would be about 14 million fewer road lorry movements a year than today. “Freight trains have a key role to play in a decarbonised logistics system, and there’s scope for the railway to do even more”, said Helen McAllister, Programme Director (Freight Reform) at GBRTT. “Research suggests we could need to treble the amount of freight carried by rail to help meet net zero commitments. This would also cut road congestion for drivers and boost the economy.”

This call for evidence will help, claim GBRTT, help understand how much of the current and future market demand for freight could be met by rail. They seek to know how they could make the sector more efficient and sustainable, and how they can reach out to to new customers, ahead of taking the reins late in 2023.

Support to respond to customer demand

Industry has welcomed the opportunity to put their points of view. “When passenger numbers dropped as a result of the COVID-19 pandemic, focus across the rail industry shifted to rail freight”, said Kate Jennings, Policy Director at Logistics UK. “Now, with passenger numbers returning, our sector will require support and investment to respond to customer demand. Logistics UK welcomes the Government’s commitment to establishing a rail freight growth target and is urging its members to respond to this Call for Evidence to ensure the resulting plans for the future of rail freight are clear and ambitious.”

The government’s report – the Williams-Shapps Plan for Rail – recommended the establishment of the new, public rail body, of which the Great British Railways Transition Team is the forerunner. One of the Plan for Rail’s core commitments is that the Government will set a rail freight growth target – as has been established elsewhere in the Uk – notably Scotland. GBRTT’s call for evidence will be used to inform this. The target will complement those existing and future targets set by Scottish Ministers in Scotland, and magnify the impact of rail freight growth nationwide, says GBRTT.

The call for evidence will help GBRTT to understand the realistic volume of goods that could be transferred to rail. “Where the potential for future rail freight traffic exists and where new rail terminals could be needed”, says their statement. “This builds on the Department for Transport and Industry’s joint Future of Freight long-term plan, [just] published.”

That plan highlighted the role rail freight and mode shift plays in enabling a more robust and sustainable freight and logistics sector. Both documents recognise and promote the need for rail to be part of an integrated, multimodal logistics system. The call for evidence is claimed to be a pivotal next step in achieving our mode shift ambitions. The consultation launches today (5 July) and will be open for 12 weeks, until 27 September.

As well for hemisphere, Scandinavia, Baltic and for Continent, railways of England and Scotland matters.
Advantage nearness to Ocean ports shall be taken benefit of! With ABP ports connected by timely, high quality cargo railways a major hub will be in force, thus offloading the big ports of Continent, etc., etc.