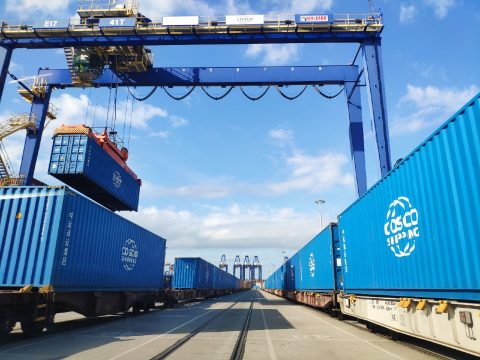 Speaking of ‘big names’, COSCO will provide its services to Hisense Group, a Chinese white goods and electronics manufacturer based in Qingdao, China. In fact, the second test train between Trieste and Budapest, which departed on 27 June, was full of Hisense’s household appliances.

Marco Donati, general manager of Cosco Shipping Lines Italy, commented on Italian media that the new train service “must be viewed as the train that will help manage Hisense’s traffic towards Slovenia, but also as the opportunity to bring more customers and traffic on the route between Trieste and Budapest”.

Trieste as a hub

During the inauguration ceremony of the second pilot train, attendees did not focus that much on the potential frequency of the new train service but on the fact that the port of Trieste is COSCO’s new focal point for development. Local players see it as an opportunity for the entire Friuli Venezia Giulia region, where the port is located, to grow. It must be noted that the region recently received a budget of 30 million euros from the EU Commission for this purpose exactly: to boost rail freight and shift more cargo from road to rail.

A network of ports

The pattern around COSCO’s ocean-rail services is not unique. In contrast, the shipping giant implements the same sea-hinterland transport concept at the port of Piraeus in Greece, which also connects with Central Europe via the Balkans, and the port of Valencia in Spain, which connects with the Iberian hinterland.

On top of that, COSCO has launched the ‘Diamond Line’ service, which has a very particular role. The company has built an “intra-European network of feeders” that combines with the intermodal sea-rail transport solutions at the ports mentioned above, plus the port of Rijeka in Croatia. In this regard, apart from connecting sea shipping lines to the European hinterland by rail, COSCO also offers feeder connections between the ports in Greece, Italy and Spain, targeting a more efficient cargo distribution based on how busy the ports are each time.