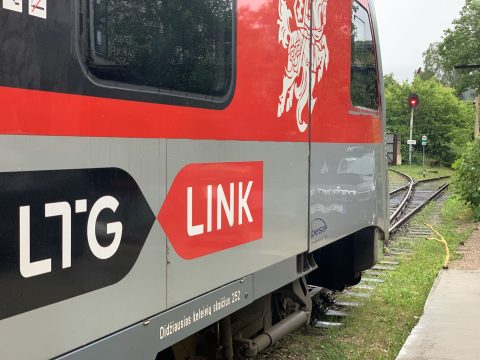 Amid the war in Ukraine, Lithuanian hauliers are scrambling to explore new possibilities of shifting loads – even changing the tracks – in adapting to the new adverse situation. But, LTG Cargo started active diversification two years ago, anticipating what was looming. This was the message of Mindaugas Skuncikas, head of Business Development of LTG Cargo, at the RailFreight on Tour event in Vilnius yesterday.

The company has recently launched intermodal freight services from Kaunas Intermodal Terminal (KIT) to terminals in Poland. The first pilot trips to Gdansk and Małaszewicze have already been carried out, and if customers wish, opportunities will be explored to transport freight to other logistics centres in Poland, such as Poznan.

Customers shipping to and from Gdansk will have access to one of the most important deep-sea ports in the Baltic Sea, with the largest container ships from North and South America and Asia arriving here. This logistics centre is the only port in the region that regularly receives freight from the Far East.

At the beginning of April, LTG Cargo successfully launched an intermodal service to Duisburg in Germany, and it already completed its first trip with full loads. “Why Duisburg? As we say jokingly, it is a banana for logistics”, Skuncikas said.

“We offer our clients to leverage the potential accumulated by the group in Poland…We see Lithuania as a hub for intermodal transportation in three ways. First, rising from the possibilities of the Klaipeda Port, where we have terminals connected with the standard gauge and broad gauge”, Skuncikas said.

The company’s other two intermodal terminals operate in Kaunas, Lithuania’s second-largest city, and Sestokai, near the Lithuanian-Polish border. “Because of the chaos in the market, the result of the war, we are developing solutions for logistics of general cargo, also for metal”, he said.

Touching up the topic of the intermodal corridor from Scandinavia to Western Union, the LTG Cargo official said the company “had a very nice discussion” about it with respective officials from Latvia and Estonia on 14 June 14.

“At the moment, we’re finalising solutions on how and how fast we can start the Amber train (an intermodal train, which runs on the route Sestokai / Kaunas – Riga – Talinn, thus connecting the three Baltic States by railways and opening new business opportunities for freight shippers- L. J) and we should be seeing some results already later this summer. We see demand from Nordic countries, especially Finland, short-term – cargo will go by ferries to and from Muuga Port and from there we will connect, on standard and broad gauge, to Vilnius terminal”, Skuncikas said. It could accept containers as well.

And then there are not yet fully tapped capacities of Kaunas terminal, from which trains go to Duisburg in Germany – they travel three times back and forth a week, the LTG Cargo manager noted. Since last September, a fourth train has been launched on the route and, Skuncikas says, that, in total, five trains could potentially run between the two cities.

He says that LTG Cargo plans to develop the Duisburg destination further, meaning that a cargo loaded in Finland will smoothly reach Italy, the Netherlands and other destinations.

Lithuania has a 1520-mm and 1435-mm wide rail gauge and therefore, it is capable to deliver freight to Western and Eastern Europe as well as to Asia. Rail freight transportation on 1435-mm gauge is operating in Europe westward from Finland, the Baltic countries, Belarus and Ukraine, excluding Spain, Portugal and Ireland.

Finally, there is the issue of sustainability. “At LTG Cargo, we believe that with the new train connection linking Scandinavia and Western European countries we can push forward to promote more sustainable solutions in the Baltic countries, especially in a couple years from now”, Skuncikas said.

In its strategy, the company had set eyes on becoming the primary transport corridor for transporting freights between the Black Sea and the Baltic Sea by connecting Northern Europe with the Black Sea region, i. e. Ukraine, Turkey, Transcaucasia (implementation of international shuttle projects).

But the regional plans had to be put mostly on hold due to the ongoing war. LTG Cargo has also recently opened an office in Ukraine, eyeing expansion in the Black Sea market.

In 2022, the Lithuanian company expects to transport around half the cargo compared to 2021, resulting in 150 million euros lost. “This will be the largest drop in cargo volumes and the lowest volume of cargo transported in the company’s history”, stressed LTG in a statement.

Lithuanian Railways, LTG, has said it is planning to lay off around 2,000 of its 9,000-plus employees, with around a quarter of the state-owned group’s managerial staff at various levels set to leave. LTG has lost around 11 million tons in annual freight because of EU and US sanctions against Belarus’ potash giant Belaruskali, which will trim its annual revenue by 61 million euros.

The railway company is set to lose another 2.6 million tons of freight and 12.8 million euros in revenue due to EU sanctions on the owner of Lithuania’s phosphate fertiliser producer Lifosa. The EU’s sanctions on Russian coal and Poland’s refusal to buy it will result in a loss of 2.5 million tons of coal shipments and 12 million euros in revenue for LTG.

The railway group will lose another 1.4 million tons of freight and 17 million euros in revenue as a result of Belarus’ ban on the transit of oil and oil products and fertilisers from Lithuania. 95 per cent of these shipments were destined for Ukraine. Lithuania’s draft revised 2022 budget, approved by the Cabinet, earmarks 155 million euros in additional financing for LTG.

Finland is not a Scandivaian Country.

Calculation has to be made! Shares offered at stock market should be an alternative, just as in the “good old days”!