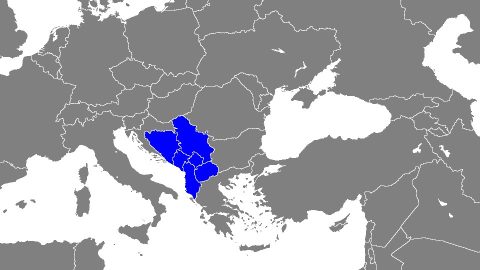 The TEN-T network extension toward the Western Balkans and the region’s integration into the EU rail market is close to implementation, pending some more steps. The region could prove of utmost importance for an efficient European railway network and may be the key to improved connectivity between Europe and Asia.

There are currently multiple investment plans targeting the Western Balkans, with the EU’s Economic and Investment Plan (EIP) leading the way to transform the region. What plans does the EU have for this territory, and how will they change EU rail transport?

What is the EIP for Western Balkans?

First of all, according to the EU Commission, the EIP “aims to spur the long-term economic recovery of the Western Balkans region, support a green and digital transition, foster regional integration and convergence with the European Union”. The Commission adopted it in 2020. It also includes the funding of infrastructure projects that will contribute to the economic growth of the countries involved and the well-being of the residents.

As a result, rail development and investments could not be excluded. As Maja Bakran, deputy director general at DG MOVE highlighted during a UNIFE online event on Monday, 23 May, the “TEN-T policy is the strongest vehicle for integrating neighbouring countries to the EU”.

Bakran also mentioned that the “key element for Western Balkans is integrating into the TEN-T” and that “the legal background needed for this procedure is already there”. Moreover, she stressed that the Commission’s latest TEN-T map draft proposal also includes the region.

Matej Zakonjšek, Transport Community secretariat director and also one of UNIFE’s event speakers, underlined that we can’t speak of a modal shift taking place in the Western Balkans. “Passenger transport is dire in the region. For freight, it’s better but not where we want it to be”. However, he said that rail is coming back in the region, and the new Belgrade-Novi Sad railway line, part of Corridor X, indicates that”.

More do be done

For the region to fully integrate into the TEN-T network, Zakonjšek mentioned that more things need to be done. “We need to shift from a patchwork to a network as is the case with the whole European railway system”, he said.

There is a need for compliance with TEN-T regulations, and this is not only limited to track electrification. The region’s railway networks should be on the same wavelength when it comes to modernised rolling stock, ERTMS implementation and compliance with all TEN-T aspects, including road safety regulations, for instance. Additionally, Zakonjšek emphasised that Western Balkan countries should be more in line for infrastructure maintenance projects with a more collective approach.

So what is the plan?

Catching up with the EU is the main focal point of the EIP, according to Michael Voegele, deputy head of unit of Western Balkans regional programmes, at DG NEAR. The EIP has some flagship railway projects that will facilitate the region’s connectivity from east to the west and north to south and enhance coastal railway links with the hinterland.

In detail, EIP’s flagship projects in the region include the following:

The first EIP financing package was approved in early April. Funding will be provided mainly by the Western Balkans Guarantee facility, which could raise investments up to 20 billion euros. Moreover, an additional one billion EU grants could benefit +300 kilometres of rail lines in the region.

There are two key points of how these investments could benefit the European rail freight sector. The first one is the ‘coastal connectivity” mentioned by Voegele. Commenting on that, Zakonjšek stressed that “the current planning would not achieve anything without rail connected to the main Balkan ports. Ocean lines connected to Western Balkan ports could be a revolution for the region and the EU”. Consequently, besides enhancing the TEN-T network, rail investments in the region could potentially provide new gateways for ocean shipping entering the European hinterland.

The second point is Corridor VIII between Skopje and the border of Bulgaria. Hari Lokvenec, CEO of Public Enterprise for Railway Infrastructure Railways of North Macedonia and Chairman of the Western Balkans Infrastructure Manager’s Network, vividly illustrated this project’s importance: “With Corridor VIII, we can provide the region with direct access to the Bosporus and the Black Sea. It is of significant importance if you think about the possibilities emerging there with the increased traffic along the Middle Corridor and congestion in Romania”.

A fully functional and efficient railway network in Western Balkans could transform them into a new hub for cargo entering and exiting Europe, especially concerning ocean lines, short Black Sea connections and direct rail links via Turkey. This region might be a remote European corner; however, much needed and carefully planned investments could help it acquire a whole new role.

A very strong piece of analysis, useful for a lot of interested parties

However, is in fact European railway network now sufficiently efficient, thus even sustainable? (For meeting with goals, 50% capacity now urgently has to be added, at existing. Contemporarily, a no longer timely state of the art infrastructure is plaguing track owners and operators with stops – and costly derailments… Utilisation of assets now has to be improved, etc.)
A decisive upgrading to a safely sustainable, a timely 32,5 ton allowed axial load, will add to capacity – and to efficiency.