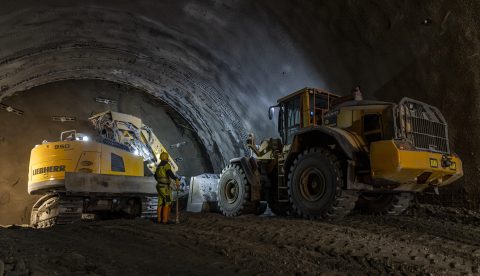 The Brenner Base Tunnel moves closer to completion after the latest construction phase. The tunnel connecting the Italian town Fortezza with the Austrian border is finished. It will be part of the 64 kilometres long railway line that will connect Italy with Innsbruck in Austria as part of the massive infrastructure project.

The tunnel between Fortezza and the Italian-Austrian border is a 24,1 kilometres long section. Last week, construction company Webuild connected two different tunnelling works: the underpass of the Isarco River next to the Brenner pass on the border and the Mules 2-3 tunnel on the Italian side passing from Fortezza.

More than half tunnelling complete

Italy is currently on an infrastructure investment mission. Last week, the Italian railway company FS announced its plans to invest 160 billion euros in infrastructure projects across the country. FS aims to upscale its infrastructure by transforming it. The investments will focus on all rail segments, from infrastructure to logistics and long-distance and urban passenger mobility.

The company has reserved a substantial budget for new equipment, tracks, tunnels and terminals. In total, these efforts will result in 16,800 km of railway lines, 1,670 tunnels, 23,000 bridges and viaducts, and 2,200 stations on the railway network, said FS CEO Luigi Ferraris.

Webuild also confirmed the rail infrastructure frenzy taking place in Italy. The construction company alone participates in 15 different projects that will become part of the TEN-T network. “We are currently involved in building approximately 500 kilometres of roads and rail lines that will join five corridors, two of which will reach the regions of Calabria, Puglia and Sicily in the southern part of the country. These projects include the high-speed/high-capacity rail lines between Verona and Padua, Genoa and Milan and several sections of the Naples – Bari,” said the company.