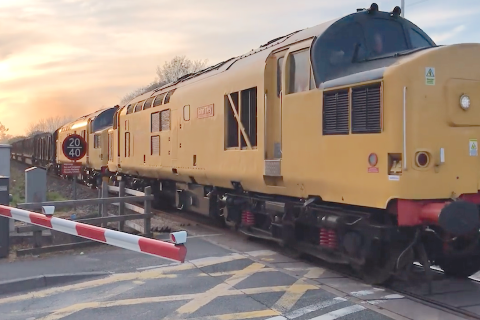 It has been a while since the seaside university town of Aberystwyth in Mid-Wales has seen a regular freight service. That may be about to change. A surprise timber train departed on Saturday evening from make-shift facilities adjacent to the town’s modest passenger terminal.

At the weekend and for the first time since 2005, a timber train left Aberystwyth, as the culmination of a feasibility study. The trial, if successful, would see rail freight traffic reestablished on to the rails of the Cambrian Line in Wales. The load of round (unfinished) timber logs was hauled out by a pair of Network Rail locomotives – deemed necessary to tackle the route around the edge of Snowdonia mountain range and, via Shrewsbury to a timber processing plant in North Wales.

A history of industrial production

There has been much local criticism of timber traffic on the rural roads of Mid-Wales. The forestry authorities have therefore made another attempt at reintroducing loads to the rails. The chosen loading terminal is Aberystwyth, on the Mid-Wales coast, and conveniently located to serve plantations in Snowdonia to the north, Rheidol Valley to the east, and various locations to the south.

Despite its reputation as a seaside resort, Aberystwyth does have a history of industrial production. The railway in the town has previously served coal, timber and agricultural industries. The legacy of that activity has left a vestige of rail freight infrastructure, which has helped facilitate this trial.

The trial run was facilitated with the use of a pair of Network Rail locomotives. To cope with the gradients and the 800-tonne load, two class 37 diesels were employed on the run to Shrewsbury and on to Chirk in North Wales, where Kronospan operate an extensive timber processing plant. The class 37s – not the most modern traction on the UK network, brought several comments on social media as they laboured loudly with their train.

Timber trains are on the cusp of sprouting up all over the UK. The punctual arrival, without incident, has been widely welcomed as a successful trial. The government in Cardiff is pursuing a policy of carbon reduction throughout indigenous industry in Wales. The trial run follows on from other rail freight timber trials and operations in South Wales and North Wales. Local reports say another trial is already scheduled for this coming Friday.

Aberystwyth is a centre of the Welsh-speaking community. No matter how it may be expressed, replacing multiple heavy truck movements with a single heavy train makes sense – in any language. (Video from YouTube / Aber Boy)

Good to see freight on the Cambrian again. The two class 97’s actually made light work of the load as they passed my cottage in Llanbrynmair at the bottom of Tallerddig.

The 97s (as Network Rail departmental numbering calls 37s) are the only locomotives fitted with the ERTMS/ETCS signalling equipment necessary for the Cambrian Line, alongside the Transport for Wales 158 (and in future some 197) units. So the 97s have to be used for freight and charters as well as Network Rail work.