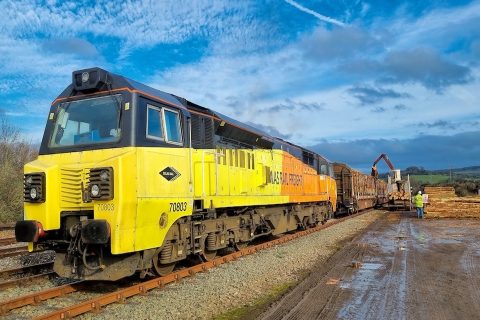 Seeing the wood for the trees

Another UK timber trial project has seen a flow return to rail freight. A sawmill in Abergavenny in Wales has received its first load of rail-transported timber since 2004. The rebirth of the load is down to a partnership between Network Rail and freight operator Colas Rail.

The timber, felled in a forest in Bickleigh, south Devon, was loaded onto a Colas Rail freight train at Hackney Yard near Newton Abbot to be transported 92 miles (149 km) to Pontrilas Timber company in Abergavenny as part of a trial run, which could see the return of ‘log trains’ as a regular sight travelling on the railway along the south Devon coastline.

The commercial interest came from Pontrilas Timber, who wanted to explore the practicalities of moving timber by rail. The company say they are encouraged by the success of the pilot and hope to work with Network Rail to produce a plan for carrying commercially viable loads, which would include improvements to the sidings and the adjacent road in Abergavenny.

As part of this pilot project, the freight train carried a total of 320 tonnes of timber in eight wagons, with the aspiration to more than double the load to 720 tonnes across 18 wagons in the future. The fact the trial run loaded so much timber is proof of the value of rail as a heavy bulk goods transporter. Network Rail put a novel twist on the usual environmental message bu pointing out that the choice of rail over road saved enough in carbon emissions to allow for 54,739 charges of a typical smart phone.

A benefit for years to come

The trial was made possible following Network Rail strengthening one of the bridges at Hackney Yard, increasing the weight limit of vehicles entering the yard to 44 tonnes. This increase means larger heavy goods vehicles (HGVs) are now able to access the yard and tranship to rail services. The strengthening of the bridge will also allow bulk operator Aggregate Industries to use Hackney Yard to load freight for transportation to customers in the south east of England. That’s expected to begin in the near future, say Network Rail.

Reflecting on the timber train, Jess Lippett, Network Rail’s senior route freight manager, said this trial run shows how by working together rail freight can have a positive impact on the environment and the economy. “The work to strengthen the bridge at Hackney Yard means that we can facilitate the movement of heavy goods across the country more effectively, a benefit that will last for years to come.”

Timber add to business case for remote and reopened lines

Colas, who have been involved in timber transportatin before, and work closely with Network Rail, providing infrastructre support services, were pleased with the new opportunity. “This is a great opportunity to expand our freight business, especially as we lead the field in the transportation of timber by rail”, said Simon Ball, Colas Rail UK freight director. “We provide a sustainable alternative by operating on rail, also reducing the number of HGVs on the road, especially during the shortage of drivers. Working with the client and Network Rail, I’m convinced that we can move forward and build on the success of the trial.”

Other timber trials have taken place recently in North Wales, and also in Scotland, where the collateral benefits of moving timber by rail from the remote and sparsely populated far north of the country have been seen as adding to the viability of lines serving isolated communities. The Campaign for Borders Rail has also raised the issue of timber extraction by rail from the vast reserves in the region as part of the business case for reopening the line through that region of the Scottish Borders and Cumbria in England.