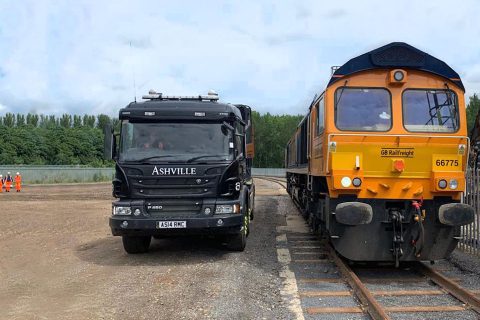 Published on 17-02-2022 at 08:58
Ashville is one of the London companies fuelling an aggregates boom

Network Rail analysis shows the extent of rail freight operations supporting construction projects in London. Demand from the UK capital dominates the extensive infrastructure portfolio in the country, and rail freight is benefiting to a greater extent than ever. Bulk trains carrying aggregates and spoil are more frequent visitors to the suburbs of London than anywhere else in the UK.

The scale and number of construction projects in London prove that the South East is still providing the powerhouse of the UK economy. The congested roads of the capital, coupled with stringent traffic and emissions legislation, have made rail the clear choice for bulk handling. Network Rail analysis shows terminal locations up and down the Thames, supporting projects as diverse as the Tideway sewer system and the Brent Cross redevelopment.

Network Rail analysis of the construction sector shows the extent of London’s domination. Graphic representation requires a box all of its own for the capital. The only region that rivals London for density of operations is the North West around Manchester. However, that is a factor of supply and demand, with the flow of useful construction materials from that region (and also the far southern counties of Devon and Cornwall) to the South East, where the major markets exist, and the geological conditions do not lend themselves to providing the necessary materials.

Prefabrication is also a factor. Mass-produced tunnel lining sections, made in the north of England, are being delivered by rail for the Tideway sewer project and previously for the Crossrail project. Tunnelling will soon be underway in earnest for the London end of the HS2 high-speed rail line into Euston.

London is never far away from a significant rail project. Underground extension to Battersea Power Station has just opened, and the Overground extension to Barking Riverside is nearing completion. Transport for London recently ordered a new fleet of replacement rolling stock to serve those requirements in anticipation of an ongoing construction and maintenance requirement.

The major rail freight operators don’t have any London-specific purchase orders, but the continuing stream of contracts does inform fleet requirements. The only issue of concern is the possibility of overdemand, with massive projects all coming on stream at once. For now, that has been avoided. As one big project like King’s Cross remodelling comes to an end, HS2 Northolt tunnelling starts, and other large projects like Clapham Junction rebuilding are on the horizon.

While capacity remains an issue, there is some off-peak and overnight capacity for freight movements around London, and new terminals are almost always on the cards. Although passenger commuter traffic remains depressed, freight demand has no let-up. The UK government may have an agenda favouring economic development in other parts of the country, but London continues to generate demand.

There is no shortage of business on the books. According to independent analysis, ten of the top eleven housing projects in the UK are in and around London. With working titles like Camden Goods Yard, which sits in between a complex of freight lines connecting the West Coast Main Line with north London terminals, rail freight can be expected to be in the forefront for the foreseeable future.