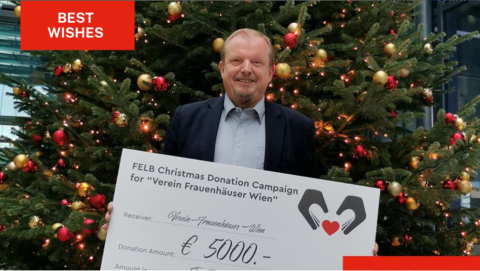 FELB will not be giving customer gifts for Christmas in 2021. Instead, the New Silk Road operator, headquartered in Vienna, is donating an amount of 5,000 euros to the Vienna women’s shelters, thereby making a valuable, social contribution.

The Association of Wiener Frauenhäuser was founded in 1978. There are four women’s shelters in Vienna that offer protection and help to abused or threatened women and their children. A total of around 175 places are available there for women and children. There is also an outpatient advice center. The consultations are always anonymous and free of charge.

Far East Land Bridge (FELB) specializes in transporting 40 foot DV, HV and 20 foot containers between the Far East (China, South Korea and Japan), Russia and Europe. According to the company, it is known for its service orientation. In line with this, FELB decided to donate 5,000 euros to an important social project instead of customer gifts.

‘We did not think long’

“We didn’t have to think long about where our donation should go this year”, explains Uwe Leuschner, CEO of the FELB Group. However, this was not because there were not enough projects worthy of funding, he emphasises, but because the admirable commitment of the Wiener Frauenhäuser Association is an outstanding example of solidarity – and therefore of values ​​that deserve special attention in the run-up to Christmas.

With this donation, FELB would like to make its contribution to helping women as well as women and children in need. “This kind of meaningful giving is very important to us and we are sure that our customers see it the same way,” adds Leuschner.

In RailFreight Live today, we show an interview we conducted with Uwe Leuschner for our new concept: the CEO Talks. In this broadcast concept, we take time to get to know industry leaders in longer, more in-depth interviews. We met Uwe Leuschner at the European Silk Road Summit in Amsterdam earlier this month, and sat him down for a good talk.

Do you want to watch this interview? Lean back and tune in at 1pm CET on our YouTube Channel, or down below.