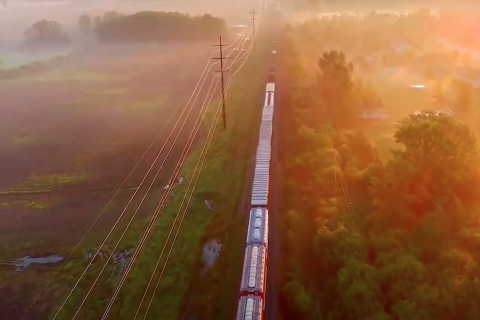 North America, where diesel rules supreme, is about to see a shift in freight haulage hierarchy. One trans-continental carrier is about to break ranks, with a plan to ditch the diesel and bank on batteries. Canadian National has signed a deal with Wabtec for the delivery and deployment of a FLXdrive battery-electric freight locomotive, the first fully battery heavy-haul locomotive in continental North America.

Montreal head quartered Canadian National, which operates freight traffic throughout North America, has taken the leap of faith into carbon-free traction, with the purchase of Wabtec’s FLXdrive fully battery-electric freight locomotive. The marque, familiar in shape to the first 100 percent battery heavy-haul locomotive designed for the needs of continental America.

A solution for the future

The vast ranges and equally vast loads of North American freight trains have not leant themselves to electric traction. Until now. With the prohibitive cost of wiring up the long-distance lines that cross the continent, the only solution with a shot at electrifying operations is battery power. However, the sheer weight of America’s average freight train has rendered that solution unviable. Until now.

Wabtec, well known in the UK and Europe, and operating worldwide out of their Pittsburg headquarters, has been developing what they call FLXdrive, a solution for the future, that’s very familiar in the present. Looking for all the world like the familiar shape of American freight motive power, the FLXdrive lacks just two things generations of Americans have come to expect from freight power units: the plume of a hydrocarbon smokestack and the thunderous roar of a multi-cylinder diesel unit, delivering peak power. Instead, the power unit is all-electric and all designed to deliver a transition to a lower carbon future.

With nothing less of an ambition than to render North American rail freight operations free from emissions, the operator, CN, and the developer Wabtec, have been financially supported by Pennsylvania’s Department of Environmental Protection, under a programme called the Marine and Rail Freight Movers Grant Program. “As part of our sustainability strategy to reduce freight transportation emissions through innovation, we plan to continue to lead the sector by deploying low and no carbon technologies”, said Jean-Jacques Ruest, the President and Chief Executive Officer of CN. “We believe rail has tremendous potential to reduce the environmental impact of transportation. As a mover of the economy, CN is committed to playing a key role in the transition to low-carbon economy.”

CN subsidiary company, Bessemer and Lake Erie Railroad, will be the recipient operator. “Wabtec is proud to partner with CN to accelerate the industry toward low to zero-emission locomotives”, said Rafael Santana, Wabtec President and Chief Executive Officer. The grant programme is in addition to the recently announced infrastructure programme for the United States, made public by Present Joe Biden.

CN already claims to be the most fuel-efficient railway in North America. According to their own research, their operations use approximately fifteen per cent less fuel than the industry average.

In 2020, CN’s actions to reduce emissions, mitigate climate risks and to develop the low-carbon economy resulted in CN being one of only three Canadian companies listed on the global recognised CDP (formerly the Carbon Disclosure Project) for its continuing successful development and availability of innovative propulsion technology is part of a portfolio of carbon reduction initiatives.