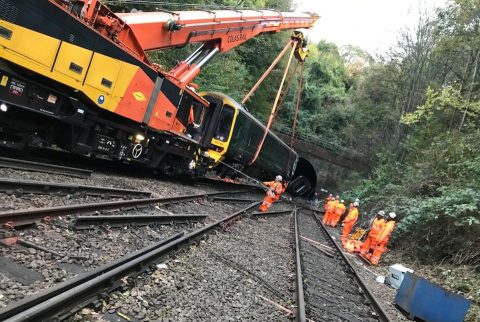 Colas gets Salisbury back on tracks

Colas Rail UK, the specialist rail infrastructure support and freight operators, have released pictures of their successful efforts to re-rail damaged passenger units involved in the recent accident at Salisbury in the South West of England. The operations involved a heavy-duty rail borne crane deployment and working in complex and confined circumstances.

Although better known to passengers as an important junction between lines running from Exeter to London and from Southampton to Bristol, the lines around Salisbury are also critical to many freight operations. Flows to and from Southampton to Bristol and South Wales pass through, as do less frequent workings from Cornwall and Devon to London. Although freight was able to divert, passenger services were suspended locally until the line could be reinstated more than two weeks later. The intervention of Colas equipment hastened that process.

The Rail Accident Investigation Branch (RAIB) is still looking into the causes of the derailment on 31 October. The incident took place at Salisbury Tunnel Junction, on the approach to the eastern mouth of the tunnel. Two passenger trains collided, blocking the lines to and from Salisbury. A chord connecting the Basingstoke – Eastleigh directions was unaffected, offering some flexibility to freight operators. No fatalities were reported at the time, but one of the drivers was severely injured, and several passengers were taken to hospital. Concern was expressed at the time by all involved.

However, the work of reinstating the lines to operational status began almost immediately. The central stage of reopening the lines required the re-railing and removal of the passenger units. Rapid response by the On Track Plant Team was how Colas Rail UK described their involvement. “we’ve spent the last few days carefully removing and lifting the damaged carriages to safety”, says their official posting.

All works safe and successful

The deployment of heavy lifting equipment is much rarer now than in the past. Fifty years ago, it was a frequent sight to find derailments (thankfully minor in the main) being attended by a fleet of maintained cranes and specialist equipment. Today, the provision and deployment of such task forces are rarer, but the equipment employed is ever more sophisticated.

“Utilising our Kirow 1200 crane, we can begin work as part of the South Rail Systems Alliance (SRSA) to reopen the line for the local community”, said Colas. The crane, capable of a 125-tonne lift, can be seen in action in the shots released by Colas. “All works were completed safely and successfully”, the company added.

The RAIB will continue their investigations. The crane photographs were taken by Dave Thomas, operations manager at Colas Rail UK, with the cooperation of Network Rail Wessex. Derailment image from RAIB.