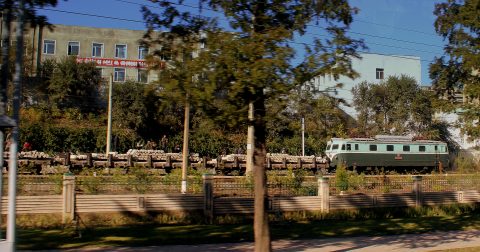 After a short, eight-day period of revival, railway trade between China and North Korea is once again suspended. Just as before, the coronavirus is to blame, as a new confirmed case appeared in the Dandong area.

On November 9, the railway trade between China and North Korea was put to a halt once again. The border was open for only eight days, after it had been closed for two years since the start of the pandemic. North Korea is currently building quarantine facilities at the border, indicating an intent to resume rail freight between the countries.

On 1 November 1 this year, the railway freight service between Dandong, China and Sinuiju, North Korea was restarted. North Korea, which is struggling with the corona crisis on all fronts, saw hope for recovery. However, only 8 days later, Dandong’s pandemic prevention policy interrupted the railway trade between the two countries again. It is reported that the border customs are currently suspended.

Before the pandemic, China accounted for 90 per cent of North Korea’s annual international trade. The two-year suspension of cross-border trade has stretched North Korea in terms of food, medical equipment, and even currency issuance. In particular, the food gap will reach 860,000 tons this year.

Under these circumstances, it seems that North Korea intends to resume rail trade with China. According to the Financial Times, North Korea is transforming an air base near its border into a disinfection facility for train transportation of containers. The facility is located in Yuzhou near the northwest border of the two countries. This city is across the border from Dandong and is the main trade hub.

Experts said: “North Korea’s establishment of a quarantine facility in this situation shows how eager they are to open up a certain degree of trade, because they can’t close it anymore.” In addition, the North Korean authorities seem to be working with Russia. Similar facilities were built in the border areas of the country.