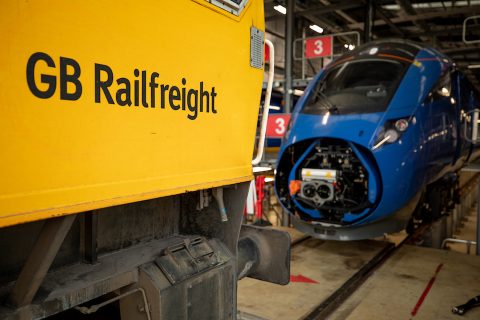 Rail freight to the rescue to deliver new passenger fleet

Britain’s big blue – the new Lumo branded low-cost express passenger service between Edinburgh and London is on the rails and running. A little help came from the UK rail freight sector. Operator GB Railfreight helped deliver the fleet from quayside to trackside in time for last month’s highly successful launch.

East Coast based GB Railfreight has delivered a new East Coast Main Line fleet for the brand new operator on the line – Lumo. The high-speed Hitachi electric fleet was delivered from the manufacturers’ assembly plant near Newcastle to the Lumo train maintenance facility within the Craigentinny depot on the east side of Edinburgh in Scotland.

Since May, GBRf has provided Hitachi Rail with train planning, haulage, and crews to test these new trains. The fleet of five-car sets painted in a distinctive all-blue livery will, according to the operators, bring rapid, low-cost electric travel to the East Coast Main Line, from London to Edinburgh. GBRf, for their part, will shortly provide rapid, low-cost delivery of the fifth and final train for the Lumo fleet.

All five trains will be maintained at the Hitachi Rail Edinburgh depot in Craigentinny. “GB Railfreight, in partnership with Hitachi Rail, is proud to have supported Lumo by delivering its brand-new fleet of Class 803 high-speed electric trains that entered service last month,” said the operator.

Stack movements are an important part of the rail freight offering. “Working closely with our long-standing client Hitachi Rail, we’ve ensured the new fleet of Class 803 [trains] welcomes passengers as promised”, said John Smith, CEO of GB Railfreight, who saw this operation as an indirect contribution by GBRf to a carbon-free future. “This is a giant step forward in showcasing the role electric rail travel can and must play if the UK is to meet its net-zero targets”, he said.

The long-term partnership between GBRf and Hitachi Rail will now focus on commissioning new trains for East Midlands Railway and the West Coast Partnership, in addition to transit and testing operations in support of existing fleets across the country.

“When it came to selecting a partner to act as Test Train Operator, Hitachi chose GBRf based on their previous performance and values”, said Gary Townsend, Project Manager, Hitachi Rail. “They have delivered collaboratively with Hitachi against the backdrop of a global pandemic to deliver these 100 per cent electric trains on time for the service launch.”

Hitachi has booked GBRf well in advance for their work with EMR and other customers. It’s unclear if they benefitted from early booking like Lumo passengers, but we’re sure they have their railcards in order beforehand…