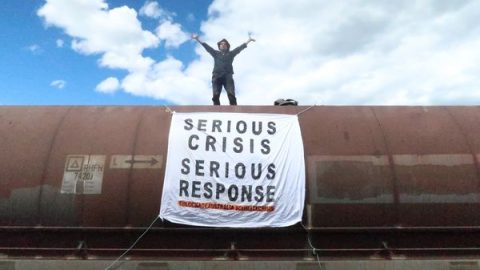 No coals from Newcastle as 20 trains are blocked by protestors

Australia is often held up as an example of just what can be achieved with bulk transport by rail freight. However, as COP26 finally moved to an agreement on ‘phasing down’ fossil fuels, moving forty-thousand tonnes of coal from the vast mines in New South Wales is not necessarily the most environmentally friendly example. Protestors agree and have been waging a campaign, targeting rail freight Down Under.

Around twenty trains have been halted by protestors – some reportedly hanging themselves over the tracks. The actions of climate activists have brought damning criticism from the rail freight industry at large, and from public officials in Australia. Despite grabbing headlines around the world, and drawing attention to Australia’s coal mining industry, they have gained few friends from the railway community.

A group, identifying themselves on social media as “Blockade Australia”, say that they have successfully held up operations. Newspapers have printed pictures of ‘idiotic protestors’ trespassing on the rails and boarding freight hoppers to ‘return coal to where it belongs’ by shovelling cargo from wagons into the Outback trackside.

Protestors claim on of their number, identified only as Andrew, has been detained for his actions. “[A] 64 year old Grandfather who stopped all coal supply to the world’s largest coal port has been arrested and taken into police custody”, says the protestors social media post. “He was removed from atop a full coal train by a cherry picker. Andrew is the fourteenth person to blockade this supply chain in the last seven days.”

“Many ordinary people are just trying to earn a living”, said Dominic Perrottet, the Premier of New South Wales, who was also critical of the danger protestors brought upon public servants and railway personnel. “When protesters use disruptive tactics they put themselves at risk of harm and also put the police and emergency personnel responding to these incidents in danger as well”, he said.

The issue has deposed the controversial “Inland Rail” project, as the most debated rail topic in the Australian media. Speaking to radio 2GB Sydney, Jason Ferguson of Southern Shorthaul Railroad, estimated the cost to his small operator was over 300,000 Australian dollars per week (160,000 pounds Sterling, 176,000 euros). “’They think they’re targeting coal but they’re shutting down the whole network – grain, cotton, passengers”, he said of the protestors. “It’s having a devastating effect.”

Pacific National, the company most affected, is a huge corporation, all across Australia. The company operates in many sectors of bulk transport and, when it comes to Australia, bulk really does mean bulk. PN runs trains regularly in excess of 2500 metres in length and loaded with more than 30,000 tonnes. The company’s own website is unapologetic about its activities in connection with coal transportation. However, they do give equal prominence to their other customers, noting that aggregates and intermodal are just as important to the company and the national economy. In line with other operations around the world, they emphasis the green credentials of rail freight logistics.

Last week, protestors claimed to have stopped twenty trains, costing the company over one million Australian dollars each (545,000 pounds Sterling, 640,000 euros). “Pacific National is committed to conducting business activities in a way that minimises adverse environmental impacts and delivers continual improvement in environmental performance”, says their statement. “The company goes on to say that their environmental and social responsibilities are at the top of their agenda. “We acknowledge that as the leading rail freight provider with significant operations across Australia, that we have a role in mitigating emissions from our operations and our overall environmental and social impact”.

The UK recently signed a trade deal, opening up the Australian market to UK rail technology firms. Australia hovers around the top as the world’s biggest coal exporter. There are mines in every territory of the country.