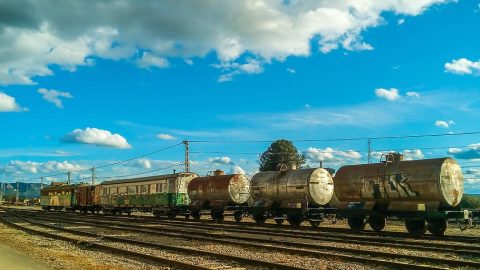 The railway trade between China and North Korea is showing signs of a restart. Preparations for that have been completed, but the start of an actual service is still unknown. This was announced by the Ministry of Unification of South Korea. According to other media sources, last Monday, the railway freight service between Dandong, China and Sinuiju, North Korea, was restarted. The line crossed the Yalu River border.

According to an official working in a trading organisation in Sinuiju, trading companies have been busy transporting various products to Sinuiju and Ulju in preparation for export to China. In addition, they are also drafting trade contracts with their Chinese counterparts to import materials from China.

Before the start of the pandemic, railway cargo from China was usually transhipped at Pyongyang Xipu Station before being sent to its destination. This time the service is is different. According to anonymous sources, imported goods from China must stop at Yuzhou Station, undergo customs inspection and disinfection, and stay in the quarantine centre for a week before being transported to other parts of North Korea.

Since the beginning of the pandemic, North Korea has closed the border for China to prevent the spread of the virus. Over the last two years, the restrictions have only got more intense. In the first three quarters of this year, the bilateral trade volume between North Korea and China was US$185 million, only one-third of the same period last year; the trade volume in September this year fell to 29 per cent of the same period in 2019. Before that, China assumed 90 per cent of North Korea’s annual international trade.

The interruption of trade has resulted in shortages in North Korea of food, medical equipment, and even currency issuance. In order to cope with the severe shortage of daily supplies, import and export trade seems to have recovered since March this year. Since July this year, the number of imported goods by sea has increased. By August, North Korea had allowed medical and anti-pandemic supplies to enter the country. According to data from the General Administration of Customs of China, the bilateral trade volume between North Korea and China in September was 69.9 million U.S. dollars, a year-on-year increase of 142.8 per cent, the highest record since the blockade.

The picture must show a train in Europe.The cars have side buffers and screw coulers.