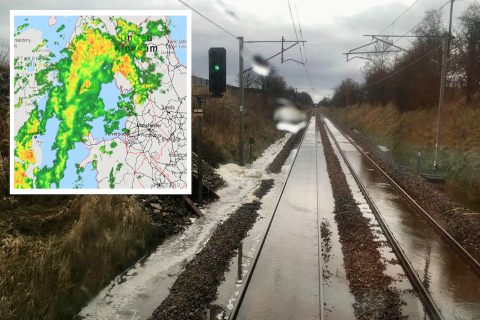 UK: major disruptions over weekend due to harsh weather

The last days of summer and the first day of winter were marred by widespread disruption to the British railway network. On the day that British Summer Time officially ended – as station clocks were traditionally turned back one hour and Greenwich Mean Time once again rules the timetable – Britain found itself plunged into chaos, as a storm that respected neither timezone first submerged then blew away the British Isles.

Rain, rain and more rain hit the west coast of Britain on Thursday and Friday, forcing infrastructure management agency Network Rail to impose speed restrictions and closures. Most disruptive was a closure to the Severn Tunnel, which connects South East England with the West of England and South Wales. High winds hit the south and east just as the waters were receding, bringing down overhead wires on both the East and West Coast Main Lines. Planned engineering works were also in place, further reducing the overall network capacity.

On Thursday, Network Rail issued warnings over the West Coast mainline between England and Scotland and Cumbrian branch lines, which were disrupted due to very wet weather. The West Coast Main Line, Europe’s busiest mixed-traffic route, was particularly badly hit, forcing electric-hauled freight off the route and forcing long-distance passenger operators to resort to shuttle services, mainly interchanging at Preston in Lancashire – in an effort to preserve stock positioning and give passengers the best opportunity to complete their journey.

“Torrential rain risks flooding tracks in Cumbria and cross-border routes with over 100mm of rain expected to fall in 24-hours”, said Network Rail in advance. “Speed restrictions will be in force until 0800 on Friday 29 October to keep passengers and freight moving safely.” Network Rail continued to monitor the situation. “Safety is our priority, and we constantly monitor the weather to react to what mother nature throws at the railway”, said Phil James, managing director for Network Rail’s North West route.

Calls for a resilient cross-border route

Freight operations have some better ability to reroute. Notably, last year, Direct Rail Services (now part of the rebranded Nuclear Delivery Solutions) took their WCML electrified services south, east and then north via the east coast to avoid planned closures on the normal route. However, even that ingenuity would have been challenged this weekend. In separate incidents, both the WCML in the vicinity of Milton Keynes and the East Coast Main Line in Yorkshire were blocked on Sunday by fallen trees, Brough down by high winds.

Passenger services were cancelled on both lines for a large part of the day, meaning many delegates heading for COP26 in Glasgow were frustrated in their travel plans. Quite how they may have noted a climate-induced emergency on the railways may well be the subject of debate in Scotland later this week. Delegates at the slightly more modest Annual General Meeting of the Campaign for Borders Rail – held in Carlisle on Saturday – debated providing a resilient freight diversionary route through the Scottish Borders. It was noted that the Carlisle and Settle line, which runs across the high ground in the middle of northern England, remained open throughout the disruption.

In an unrelated incident, two passenger trains crashed in a tunnel near the west of England cathedral city of Salisbury on Sunday evening. Mercifully, despite the accident location, no fatalities were reported.