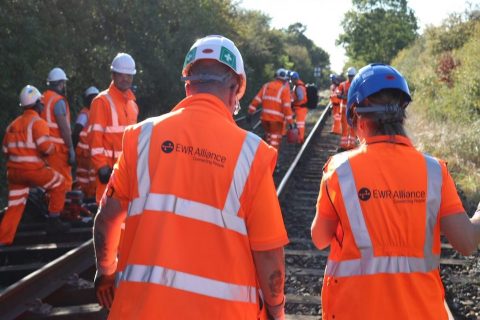 The East West Rail Consortium, which has campaigned to reinstate a railway between Oxford and Cambridge in East Anglia for more than 25 years, has been relaunched as the East West Main Line Partnership. The organisation has also realigned its policy to reflect the greater ambition of establishing a viable “coast to coast” route for the UK, serving freight and passenger demand into the twenty-first century.

Established by local authorities in 1995, the Consortium has played a fundamental role in establishing the basis for the scheme, on which has been built subsequent work by the Department for Transport, Network Rail and the East West Railway Company. With the construction of the Oxford-Bletchley/ Milton Keynes section of East West Rail well underway, the Partnership is championing the long term opportunity for true, coast to coast connectivity, achieved through an East West Main Line, with services running from Norfolk and Suffolk all the way through to South Wales.

The East-West Rail project is broadly a UK government-backed scheme to rebuild and modernise the former line between the university cities of Oxford and Cambridge. The first stage, between Oxford and Bletchley and Milton Keynes, is expected to be completed and running from 2025.

Critical interfaces (like the flyover at Bletchley on the West Coast Main Line shown above) will significantly affect the overall budget. Funding for further sections, taking the line through to Cambridge, has yet to be committed, but the case has been growing, not least because of government commitments to a net-zero economy by 2050. There is a huge groundswell of support for the project, with national agencies and around twenty local authorities behind the plan.

The new Partnership seeks assurances on “coast-to-coast” connectivity, embracing opportunities for freight traffic originating and heading east of Cambridge to Norwich and Ipswich (notably the ports of Immingham, Felixstowe and Harwich) and connecting with markets to the west of Oxford, including Swindon, Bristol and South Wales.

The Partnership also states its intention that the project ensures East West Rail contributes to the national rail freight strategy requirements. That clearly sets out their stall as a champion of rail freight. The Partnership statement says it is also making the strongest case for prioritisation of the Felixstowe-Nuneaton corridor.

In the broader context of the mixed-use of the line, the Partnership says they want to work with all partners to support delivery at the earliest opportunity, and no later than 2030, of the core Oxford-Cambridge working. They also want to ensure North-south connectivity, including the Aylesbury-Milton Keynes link and opportunities for new journeys using intersection with radial main lines – including the West Coast Main Line, where building work is already underway. Although crossing the HS2 project in Buckinghamshire, the new line will not connect directly with the high-speed route.

Stakeholders with both passenger and freight interests want Interchange and strategic transport hubs to operate in a frictionless environment – which would facilitate, among other operations, light logistics transfer between transport modes. “A twenty-first-century main line, ensuring East West Rail supports the environment and the communities it serves”, says the Partnership’s statement. “This includes making it electrified and ‘digitally-enabled from the start.”

“Supporting the delivery of East West Rail between Oxford and Cambridge at the earliest opportunity and making sure there is appropriate mitigation for local communities during its construction remains fundamental to the Partnership’s purpose”, said councillor Steven Broadbent, Chair of the East West Main Line Partnership, and who holds the transport portfolio on Buckinghamshire Council. “However, we have always been clear that delivery of the current East West Rail proposal should be just the beginning of the transformation in connectivity.”

Councillor Broadbent added that the Partnership is championing the ambition for an East West Main Line to realise the government’s investment’s transformational potential truly. “The main line will boost the regional and UK economy and enable businesses to compete on a global scale, unlocking opportunities for residents, and reducing reliance on-road vehicles to achieve net-zero emissions”, he said. “By being even more ambitious for East West Rail, the government can create one of the UK’s most truly transformational pieces of infrastructure.”