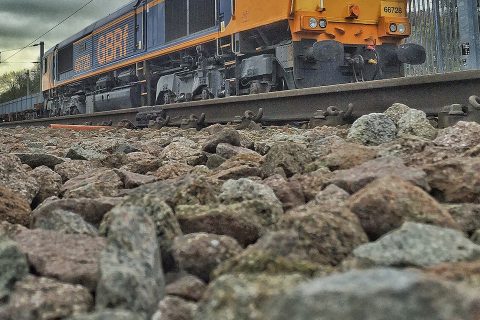 A new collaboration between aggregates specialists GRS, and mining operators Tungsten West, could provide decades of work for rail freight operators. The deal could also reinforce freight traffic in Devon and add to the case for rail development in the region.

GRS has signed a deal with Tungsten West to use huge quantities of mining waste as a source of sustainable aggregates for the domestic and overseas markets. That is potentially good news for rail freight in the region, and for operators, including existing partners GB Railfreight.

GRS has secured an exclusive deal to bring to market millions of tonnes of granite stone, which is otherwise discarded as waste. The flow arises from tungsten mining, and will be used as sustainable construction aggregate. The multi-million pound venture sees GRS join forces with Tungsten West, operators of recently reopened Hemerdon tungsten-tin mine near Plympton in Devon, south west England. GRS say they intend to sell high-quality secondary aggregate and transport it nationwide by sea and rail.

The company has already stated its case for using rail freight from the location. “By-products arising from mining are widely rated as one of the most sustainable sources of construction aggregate”, says GRS. “Transportation by sea and rail produces a fraction of the carbon emissions of the equivalent road journeys.”

Geologists recognise Tungsten as the hardest elemental metal, which also has the highest melting point. It has numerous uses in electronics and manufacturing. Hemerdon mine is internationally important because it is the world’s fourth largest tungsten reserve (and the second largest to comply with the globally recognised agreements of the Committee for Mineral Reserves International Reporting Standards (CRIRSCO). The location is also Europe’s only source of tungsten.

The mining of tungsten also gives rise to thousands of tonnes of granite, ideal for a full range of secondary aggregates from bulk fill materials to single sizes for concrete and many other construction applications. GRS says it will use its well-established freight network – in particular rail and marine – to efficiently transport the aggregate to construction projects across the south of England and potentially further afield. The granite aggregates will be processed on site at Hemerdon helping to sustain a number of local jobs.

Years of experience and success

“This is a true symbiotic collaboration between two like-minded businesses with shared ambitions”, said Jon Fisher, the CEO of GRS Group. “Not only are we helping the UK to remain self-sufficient in essential minerals, but we’re also distributing them in the most sustainable way possible. GRS already trades and transports almost 20 million tonnes of construction materials every year – around half of which is from recycled or secondary sources – and this deal reinforces our whole ethos to make the best use of the UK’s available resources.”

Max Denning, CEO of Tungsten West, is looking forward to working with the their partners in teh deal. “Tungsten West is extremely excited to partner with GRS, especially as they’re the UK’s leading aggregates trading company with an exceptional reputation for success”, he said. “By GRS applying their years of experience and success across all industry verticals within the construction materials sector, Tungsten West can offer a significant new mineral resource, at scale, to the UK market. GRS brings a wealth of experience, credibility and strategic thinking that complements our approach.”

The partners have addressed Britain’s well-reported issues with long-haul road driver shortages. The intention is to use nearby railheads for onward distribution. Starting this month (September 2021) GRS expects to ramp-up secondary aggregate volumes from Hemerdon to distribute more than a million tonnes each year for the next decade and beyond. After a short lorry journey from Hemerdon, the aggregate will be loaded onto ships at Plymouth for transportation to other ports around Britain. Greater freight traffic would also strengthen calls for rail development in the region, which is already under consideration.

The aggregate will also be hauled a short distance by road to nearby Marsh Mills (between the port of Plymouth and the town of Plympton) where it can be loaded onto trains for onward distribution via the rail network. Through its Cornish subsidiary Maen Karne and London-based business Walsh, the GRS Group already successfully transports secondary granite from the Cornish china clay industry into London by sea and rail. By volume aggregates represent the single biggest flow of materials in the UK economy.

That new arrangement builds on a partnership between the two businesses that began in 2016, primarily supplying rail haulage services between the UK’s largest granite quarry, Mountsorrel Quarry in Leicestershire, operated by Tarmac, and a major aggregates supply depot at Wellingborough, Northamptonshire operated by GRS.