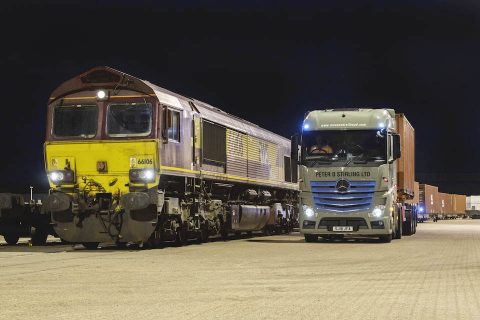 Do latest UK stats give cause for optimism?

Rail freight moved across Britain’s railway has returned to pre-pandemic levels, according to the Office of Rail and Road, the UK government’s accredited primary provider of railway industry official statistics. However, whether those statistics can be interpreted as a sign of economic recovery is up for debate.

The regulator’s Freight Rail Usage and Performance stats show that in the first financial quarter of this year (April to June 2021), a total of 4,33 billion net tonne-kilometres of rail freight was moved across the network, which is vastly more than the volume moved in the corresponding quarter last year. Clearly, the biggest contributing factor to that is the first months of the national lockdown which arrested the entire economy.

ORR’s stats also show rail freight continued to have a punctuality figure above 90 per cent, despite a drop in performance compared to the same quarter in 2020-21 and 2019-20. During last year’s corresponding quarter, the freight sector had the network to itself. The passenger timetable was effectively suspended, but further analysis will be required to identify the contributing factors from 2019-20.

Who is the biggest customer

The network has been busier with mixed traffic back on the tracks – albeit with around one in five passenger trains still suspended. Freight operators experienced 8.27 minutes of delay per 100 train kilometres in this reporting period. There is little surprise that this is 52.8 per cent worse than the same quarter a year earlier (2020-21 Q1). It was also 3.0 per cent higher than the same quarter two years ago (2019-20 Q1).

The commodities portfolio moved by rail continues to change slowly but follows a predictable pattern. Construction products moved increased the most compared with 2020-21 Q1. The ORR research puts this down to high levels of demand for aggregates to fulfil the start of HS2 work. Other major construction projects are underway in the UK, but HS2 represents the single biggest customer at present.

Light logistics yet to show up significantly

As bell weather of economic health overall, the movement of finished goods is often quoted within the industry and by outside observers. Domestic intermodal, in which the ORR includes transporting goods to and from Britain’s ports, had the largest share of freight moved at 37,9 per cent. However, despite a 22.5 per cent increase in volumes since 2020-21 Q1, there has been a reduction of 3.8 per cent compared with 2019-20 Q1.

We are still several quarters away from seeing reports of volume increases in light logistics. However, with a. Number of wold-be operators in the wings, waiting to take the stage, this will become a significant statistic in the coming year. How the ORR may classify and measure that traffic is yet to be seen, but it will give rail freight a more rounded contribution to economic performance. Certainly, there is little likelihood of rail freight making a negative contribution to climate change. While transporting some fossil fuels are still important flows for the sector, coal continues its downward trend, reducing by 65.2 per cent, compared to 2019-20.

Perhaps the most basic statistic of all is the most telling. The ORR found that freight lifted increased by nearly five million tonnes over the last year.