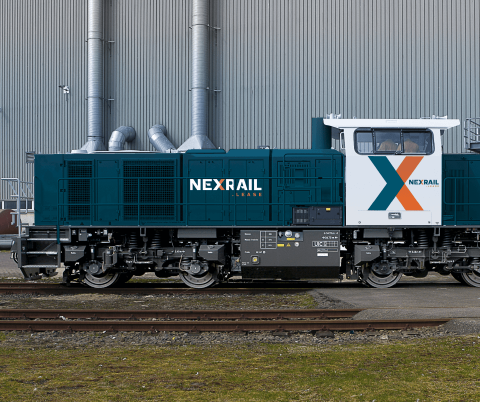 Nexrail will focus on providing innovative, sustainable locomotives for non-electrified operations, and is currently dedicated to the freight and shunting markets. It has purchased 53 shunting locomotives, and ordered another 50 hybrid locomotives hybrid from Vossloh.

The first transaction of the new company is the purchase of the 53 shunting locomotives lease pool from Vossloh Locomotives, with an average age of less than 5 years. The main types are DE 18, DE 12, G 6, and G 1000. With the backing of their owner InfraVia Capital Partners, the company will also purchase 50 DE 18 SmartHybrid locomotives. These locomotives will be available as of 2023 and will run in Belgium, Luxemburg, France and Germany.

Vossloh Locomotives, based in Kiel, Germany, is a subsidiary of China Railway Rolling Stock Corporation (CRRC) ZELC since 2020, the world’s largest manufacturer of rail vehicles.

The SmartHybrid locomotives are new, universal, four-axle mid-cab locomotives, and feature a 1,800 kW and fuel-efficient diesel engine. The engine has a stage V emission standard, with a reduced ecological footprint. It also has an additional traction battery of 144 kW, enabling up to one hour of emission-free operation. This should lead to fuel savings of 20 to 50 percent.

The locomotives are equipped with the European train control system ETCS, including an upgrade option to level 2. This means the locomotives can cover Belgium, France, Luxembourg, Germany and parts of the Netherlands. The companies boast about the DE 18 Stage V SmartHybrid’s flexibility, being equally suited to heavy shunting and mainline operations as well as infrastructure tasks in construction site operations. Under the agreement, Nexrail will be the exclusive provider of this type of modern locomotives for the Belgium market.

Neil Bennett, Executive Chairman of Nexrail Lease: “Nexrail is already developing plans to introduce sustainable fuels and battery hybrid solutions across all its markets. This transaction with Vossloh Locomotives and the order of the DE 18 Stage V SmartHybrid for the Benelux market is the inaugural step of our own journey as a lessor.”

It’s great to see the investment in Freight Locomotives to increase movement by Rail. Especially as these locos offer a reduced ecological footprint with the additional traction battery fuel savings of 20 to 50 percent.

I work quite closely with major freight companies and I’m sure this will be a welcome addition.