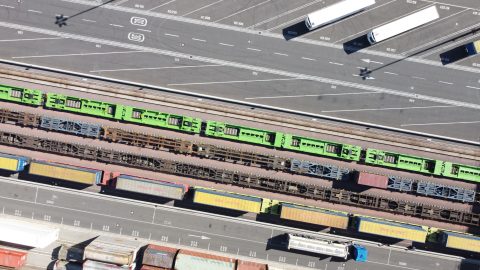 Who is the hidden champion of semi-trailer transport in Europe?

By looking at the heart of central Europe, specifically Luxemburg, one can find a hidden intermodal transport gem. The country itself is a rail freight crossroad and hub. But CFL Multimodal is one of the champions of semi-trailer transport in Europe, with a total terminal handling capacity of 600,000 TEUs per year.

According to Imad Jenayeh, Senior Business Developer at CFL Multimodal, the possibilities emerging in and around Luxemburg are unprecedented. CFL wants to use this momentum to expand its operations in Europe and the New Silk Road context. Its accomplishments so far show that the company is on the right path.

Imad Jenayeh is a former engineer with deep insights into the technical aspect of intermodal rail. Before working for CFL, he was in the CargoBeamer team for ten years. He also played a crucial role in the Calais terminal project. During the Railfreihght Summit Poland 2021, he will participate with a presentation regarding the Lohr technology for non-cranable trailers and its deployment in Poland and Luxembourg. Secure your online ticket for the summit here.

CFL is currently focusing on two different directions for its development: Europe and China. When it comes to Europe, the company is a well-established European railway undertaking and operator, explains Jenayeh. It currently targets terminal infrastructure and promotes the Lohr technology to as many new partners as possible to develop further European intermodal connections by using it.

On the other hand, China remains in the picture. Currently, CFL offers last-mile transportation services for trains that arrive from China to Poznan, Rostock and Kaliningrad. However, it puts all the effort to accept block trains between China and Europe. Currently, the company is on the look for partnerships that will allow the realisation of these plans.

As Jenayeh narrates, currently, there is a powerful pull in the market towards intermodal, both for political and practical reasons. The EU green laws are pushing many companies to try intermodal. That is why Jenayeh frames the situation as a positive challenge. Of course, he says, it’s impossible to put everything on rail due to capacity restrictions. However, there is a growing trend currently towards rail that will become bigger in the future.

CFL is coping quite well with the intermodal expansion, in any case. Its services connect Luxemburg with main ports in Belgium and other Benelux countries, while it has more services in the pipeline, for instance, with Poland. The company’s flagship project, however, is the Luxemburg-Spain train.

Departing from Luxemburg and travelling until the Spanish border, this train offers up to four daily roundtrips. It is transporting mainly semi-trailers, plenty of non-cranable reefers, while in some trains there also some containers. The train travels at a speed of up to 120 kilometres per hour and a length of 850 metres. For Jenayeh, its success proves the importance of horizontal transhipment for non-cranable trailers in rail freight transport.

Poland is the future

Poland could not be missing from the discussion. It is a gradually important country that functions as a gateway to the New Silk Road. Moreover, Jenayeh describes it as “Europe’s biggest factory” with lots of exporting possibilities. Nevertheless, he acknowledges that the country faces some issues. For instance, the imbalance between east and westbound flows is a crucial matter. In his opinion, cooperation and interconnection of different modes is the key to success in Poland.

The RailFreight Summit Poland 2021 is an excellent opportunity to discuss all these issues, Jenayeh says. With his attendance, he aims to finally meet professionals physically and grasp the opportunity of analysing burning issues and provide more visibility for Luxemburg in Europe, Russia and China.