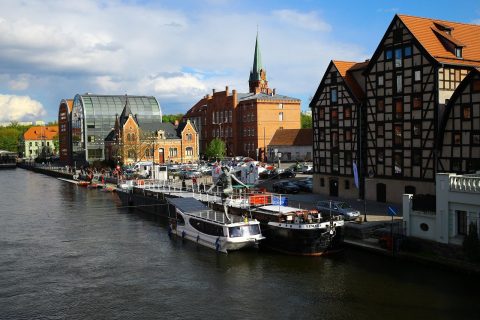 Although intermodal transport in Poland is blooming, the number of intermodal terminals is lagging behind. A good reason to build a completely new terminal, thought the initiators of the New Amber Trail Association. And the best location for this is Bydgoszcz, the largest city of the Kuyavian-Pomeranian region in north-west Poland.

For those who are less familiar with Poland, the city is situated on the banks of the Vistula river, an E-40 waterway. It is located 143 kilometres south from Gdansk and 190 south of Gdynia. It lies on the Baltic-Adriatic route, and is not far from the North-Sea Baltic rail freight corridor. Thus, a lot of competition, and a lot of opportunities. Łukasz Religa would like to focus on the latter, and sees in Bydgoszcz “a new TEN-T node”.

Religa is president of the New Amber Trail Association and speaker at the Rail Freight Summit, which is to be held on 1 & 2 September in the Polish city of Łodz. We spoke to him ahead of the conference to learn more about the new terminal in Bydgoszcz.

What would be the added value of another terminal in this already densely connected area?

“There is a belief in Poland that there are still too few intermodal terminals, which is also clearly emphasised by representatives of our government. According to data from the Railway Transport Office for 2020, there were 39 terminals of this type in Poland, while our western neighbours, the Germans, had more than 170.

“At the same time, for several years, we have seen a dynamic development of intermodal transport in Poland. Over the last ten years, the number of tons of cargo transported in this way has increased more than fourfold. For this reason, there is space for more terminals. In the Kuyavian-Pomeranian Voivodeship, and actually also in the neighbouring Pomeranian Voivodeship, we currently do not have any intermodal terminals.”

“From the very beginning, the entire concept of the Bydgoszcz-Emilianowo intermodal terminal has been based on close cooperation with the seaports in Gdańsk and Gdynia, and ultimately also in Elbląg along the Vistula Spit cut. There is a popular saying, indicating that Bydgoszcz could become an ‘outer gate’ for Gdynia and Gdańsk.

“If this whole concept was realised, we would have a textbook example of implementing an intermodal model: it is more economically viable for smaller trains to send containers to Bydgoszcz, from where they would go to the area of e.g. the Adriatic Sea, where they are re-loaded to a larger train. This is certainly more profitable than sending two separate trains from Gdańsk and Gdynia directly to the same target region.

“The Gdynia Sea Port Authority is among the signatories of the agreement concluded in 2019 on cooperation for the creation of the Bydgoszcz-Emilianowo terminal. Gdynia is interested in cooperation with Bydgoszcz, because this port is experiencing a lack of space for storing unloading containers from ships. The port of Gdańsk, in turn, is also clearly interested in the development of inland shipping.

How far along are the plans to build a terminal here?

In 2020, the company Terminal Intermodalny Bydgoszcz – Emilianowo sp. z o.o. was established to build the terminal. It is currently engaged in obtaining environmental decisions, which is the initial stage of the investment process. It is planned to launch the terminal in the first stage by 2026. The development concept is divided into three stages.

“In addition to the intermodal terminal, it will ultimately include a river port on the Vistula, the international E-40 waterway”, Religa explains. As the terminal lies close to an airport, there are also plans to provide handling services for air cargo, with the construction of a railway line as one of the possibilities. Therefore, the initiators strive for the status of a TEN-T core network node, which would widen the possibilities to gain support from the EU.

Who will finance the construction of the terminal?

“Today, states, local governments and entrepreneurs are waiting for the release of the European fund for the long-term budget of the European Union for 2021-2023 and funds from the Next Generation EU.

“In the Polish National Programme for Reconstruction, the document implementing the funds from the Next Generation EU, a lot of emphasis is placed on the development of multimodal infrastructure, which allows us to forecast that this type of infrastructure will be dynamically developed in Poland in the coming years. The company Terminal Intermodalny Bydgoszcz – Emilianowo sp. z o.o. will also apply for these funds.”

Are there any operators interested in exploiting this terminal?

I want to answer this question carefully, because it is a bit too fast to talk about specific operators. Among the signatories of the agreement concluded in 2019 is PKP Cargo, which is a signal of interest in using this infrastructure after its construction.

“Another signatory is the agricultural agency: National Support Centre for Agriculture. This admittedly does not deal with logistics for the time being, but this shows that the Polish government is treating the Bydgoszcz Emilianowo terminal as a potential major centre for the export of Polish agricultural produce by containers. The terminal is to be open, so it will also be available to other interested operators.

How would the terminal contribute to the Baltic-Adriatic corridor?

“The Bydgoszcz Logistic Node has the potential to be an upgrading point for the Baltic-Adriatic corridor. It will be located about 50 km from the intersection with another TEN-T corridor: North Sea – Baltic. Currently, advanced investment works are being carried out to add another two pairs of tracks between Inowrocław, through which the North Sea-Baltic corridor runs, and Bydgoszcz, thanks to which freight and passenger traffic will be completely separated from each other.

“Ultimately, Bydgoszcz is also very open to the Gdynia – Karlskrona sea highway initiative, which could practically extend the Baltic – Adriatic corridor to Scandinavia. Perhaps Bydgoszcz will become an important hub for Scandinavian transport from China.

The RailFreight Summit takes place on 1 & 2 September in in the Polish city of Łodz. Łukasz Religa will be speaking on the first day, in the session about intermodal possibilities. You can have a look at the programme here, or register for this event here.