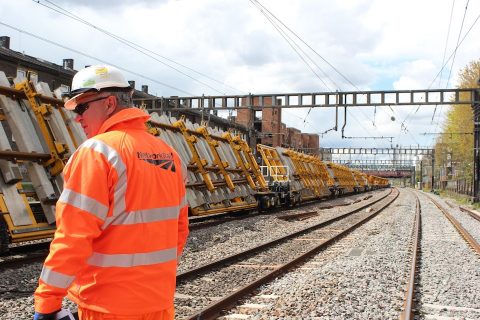 Freight to benefit from engineering works

The UK West Coast Main Line, the busiest mixed-traffic route in Europe, will see the most extensive programme of engineering works this weekend. The Late May Bank Holiday is traditionally a busy time for operations. Network Rail, the UK infrastructure management agency, is targeting the route between London and Glasgow for upgrade and maintenance works along its entire 400-mile (600km) length. Possessions will see route between London, the West Midlands, North West England and Scotland targeted between 29 and 31 May.

More paths and more efficient operations are promised across the UK. Infrastructure agency Network Rail is co-ordinating a vast engineering programme over this coming weekend (29-31 May). Freight will benefit in several critical locations. In addition to a headline project on the West Coast Main Line, routes through the east of England towns of Ipswich and Norwich will be renewed, and works will go on at Gatwick Airport in preparation for a turnkey overhaul of the station and main line junctions. In all, around 620 engineering possessions will be in operation, including freight-critical works serving ports like Felixstowe, and Liverpool, and inland terminals like Brent Cross in London.

The West Coast Main Line (WCML) will, eventually, be the biggest beneficiary of the HS2 project, currently under construction between London and Birmingham. However, that capacity enhancement is almost a decade away. Right now, maintenance and modernisation is required to keep traffic running. In addition to track replacements, this weekend will see signalling upgrades installed at Carstairs in Scotland, and at Trafford Park in Manchester, on the notoriously congested Castlefield Corridor.

Tim Shoveller, who is managing director of Network Rail for the North West and Central region, said that planning ahead had reduced the level of disruption to services. “The essential improvements taking place over the Late May Bank Holiday will build on the great progress already made this year to improve the railway”, he said. Some passengers will be obliged to use replacement bus services, and some freight will need to be rescheduled or diverted.

Ongoing works in the east of England will see routes between Norwich and Ipswich taken over by engineers. This coming weekend Bank Holiday, Network Rail plans to carry out track works to improve reliability on the Great Eastern Main Line. The line is the principal north-south route in the region, and connects to the branch connecting the intermodal port of Felixstowe. Container traffic from Felixstowe uses the seven-year-old Ipswich Railway Chord, also known locally at Bacon Factory Curve, avoiding the passenger station and allowing access the cross-country line to Ely.

Ely has already been in the news. The busy junction is slated for extensive planned upgrades to the infrastructure there. The improvements are the subject of a programme of public consultations, currently underway. The latest phase has just begun, to help get the residents behind the project, which will benefit rail freight movements across the whole UK.

Oh we do like to be beside the seaside

Not every part of the network will be under possession this coming weekend. On what is expected to be the busiest day of the year for the British seaside, Network Rail has taken the unusual step of postponing some works that might have stopped day-trippers getting to the beaches.

According to Network Rail, track renewals on the line between Yeovil and Weymouth, in the south west of England, were due to take place at Chetnole between Saturday and Monday 29-31 May. However, the works are being replanned for later in the year, meaning the coastal route will remain open. “People can take advantage of loosening lockdown rules and enjoy some well-overdue sun”, said a Network Rail statement. Buckets and spades will be conveyed free of charge on all services, we understand.