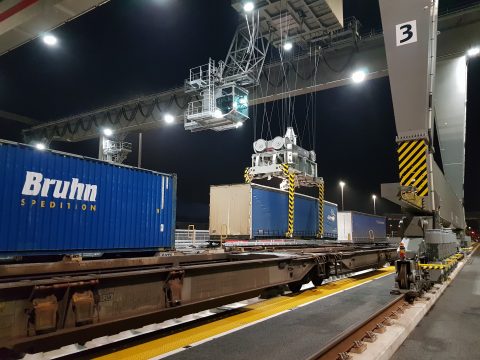 Kombiverkehr has started its new transport system to and from Hannover Lehrte with four national routes. The first trains arrived on Tuesday evening from Duisburg and Ludwigshafen, and were reassigned to their destinations – Lübeck Dänischburg CTL and Lübeck Skandinavienkai on Wednesday morning. “Together with DB Cargo and all the staff of the transfer facility, we have turned rail-rail transfer in Hannover Lehrte and hence the fundamental system idea of the MegaHub into reality”, the Frankfurt-based operator said.

“The unique advantage of the facility – the rapid movement of the cargo units between the trains in a particular short space of time – is now there for all to see,” says Armin Riedl, managing director of Kombiverkehr, commenting on the commencement of services.

After what it calls the start-up phase of the new intermodal facility, Kombiverkerh has connected the Ludwigshafen KTL, Duisburg Ruhrort Hafen DUSS and Lübeck Dänischburg CTL terminals and the Baltic Rail Gate at Lübeck Skandinavienkai to Hannover Lehrte by direct train services.

The CTL terminal operated by Lehmann opens up the possibility of continental intermodal transport with Kombiverkehr as far as Stockholm and Gävle. The Lübeck facilities are particularly useful as intermodal transit points for services to and from Sweden, Finland, Norway and the Baltic states by ferry or by rail across the Öresund Bridge.

München-Riem and Verona Interterminal will follow as further departure and arrival stations on 26 April. All connected terminals are linked to each other via the MegaHub. The connections are scheduled so that trains will arrive between 8 in the evening and 6 in the morning and be laid up only briefly.

The MegaHub is situated at an important road and rail intersection in Germany, making it an ideal geographical location for transport services. The connection of the MegaHub to the networks strengthens Hanover as a logistics location. While previously only Verona in northern Italy was on the timetable, now industry, commerce and logistics have a broad array of national and international connections to choose from when it comes to shifting transport from road to climate-friendly rail.

Not only is Hanover connected to the direct destination terminals, but in the gateway system it is now also linked to Madrid, Trieste, Pendik (Istanbul), Vienna, Budapest and Hallsberg and Stockholm in Sweden, among other places, Kombiverkehr points out.

Kombiverkehr has a 16.67 per cent stake in the operating company of the terminal, alongside Deutsche Umschlaggesellschaft Schiene-Straße (DUSS). After around two years of construction work, the facility started freight transfers between truck and train in June 2020.

Among the installations erected on the some 120,000 square metres of the grounds of the former Lehrte shunting yard since the turf-cutting ceremony in May 2018 are six transshipment platforms, each roughly 700 metres in length, and three gantry cranes. A special operations control system directs the interaction between crane, longitudinal conveying system and resources.