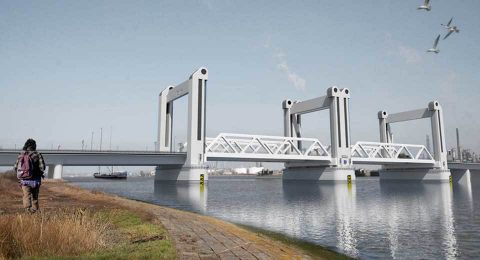 The first trial runs across the new Botlek Bridge at the Port of Rotterdam were successfully completed last weekend. Goods trains of various weights crossed the railway tracks of the 1,200-metre-long bridge at different speeds. This was announced by infrastructure ProRail, which commissioned the test runs.

Because the new bridge is six metres higher than the old Botlek Bridge, heavy trains from Botlek and Pernis that depart too close to the bridge might face issues due to the steep slope. This is why, on 6 and 7 March, ProRail carried out tests with a 1,200-ton train that travelled across the bridge at 80 kilometres per hour. Before the practical trials, various simulations had already been carried out in preparation.

“I am satisfied with how the first tests went”, says ProRail’s test manager Bob van den Bergen. “We did run into a few issues, but we had taken those into account beforehand, because it was the first time. For example, we had repair teams on standby.” During testing, ProRail was able to resolve technical issues on the spot. In the coming period, it will evaluate potential operational issues, in order to implement improvements in the next series of tests.

Watch a video of the test run this weekend.

In the period leading up to the railways’ commissioning on the Botlek Bridge, the Dutch rail organisation plans to undertake an additional number of tests. The plans include the bridge crossing by a 2,400-tonne goods train, but also a 600-metre-long train. Since the Botlek Bridge is a lift bridge with two lift sections, there is also a need to extensively test the bridge’s various systems and mechanisms.

The new Botlek Bridge opened in 2015 to replace the original bridge dating from 1955. The old bridge was increasingly becoming a bottleneck for shipping due to its low clearance height. Consequently, rail operations stopped in August 2017. Goods trains have since diverted through the adjacent Botlek Tunnel. Road traffic has already been using the new Botlek Bridge for several years. Train traffic will officially start in the second quarter of 2021.